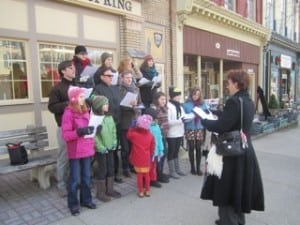 The carolers at their fourth and final stop, in front of the Village Hall

“Can it really be so?  I’m actually feeling the holiday spirit this year” and variants were sentiments heard several times over last Saturday during the Cold Spring by Candlelight festivities spread out over Cold Spring Village on a beautiful day more suited to late autumn.  Joining a group of carolers of all ages from World’s End Theatre gave Philipstown.info the perfect vantage point to spot all the goings-on around town.  Performing at four different locations, the carolers sang for appreciative crowds and noted the queues for house tours and the passing parade of costumed performers mixing with visitors consulting their maps to find their next destination.  At one point, Santa even appeared, suddenly, magically, with a sack full of goodies for lucky children nearby. 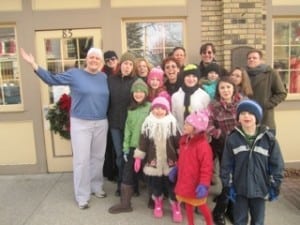 According to the event’s organizer, Rand Bridget Otten, director of development for Partners With PARC, , Cold Spring hosted over 600 people from across the tri-state area, in one of their largest fundraisers of the year.  Not only does the event raise money for PARC, which works with supports people with developmental disabilities, but, in a tandem goal of its organization, it drives traffic into Cold Spring at a needed time of the year, exposing many first-time visitors to the area and filling the restaurants and stores.

Connie Kelley, owner of the Main Street store A Country Touch, says that the day is usually the busiest and most prosperous of the year for her, sales-wise, and that this year was no exception, “There was a steady stream of people, in particular around 3 or 4 o’clock, after they finished touring the homes and were ready to concentrate on shopping.”  Kelley said that the customers seemed to have enjoyed the day greatly and were appreciative that there were many new houses this year. She added that “Rand does an outstanding job, and the effort she puts in pays off.” 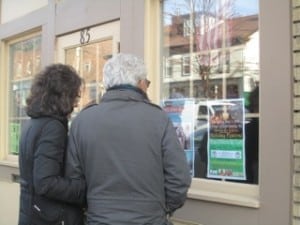 Visitors checking out the posters of the many things going on in town.

Many participants return year after year and along with seeing new houses they were treated this year to new features such as the A Class Act staged readings of A Christmas Carol which took place at Art To Wear and ice carving demonstrations outside of St. Mary’s and at Depot Square, along with the caroling, which also included singing by the Merry Minstrels, and also The Treble Makers. The addition of a Sicilian wine tasting by Corvo Wines, officiated at by Kacey Morabito Grean of WHUD, and the holiday craft fairs also made the event unique this year. 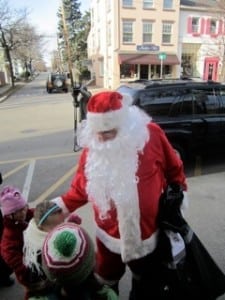 Along with private homes, local institutions such as the Putnam County Historical Society, The Butterfield Library and Hudson House welcomed visitors at Holiday Open Houses.  Grace Campanile and Kyra Watts played violin at The Chapel Restoration and St. Mary’s offered a display of historic photos, postcards and ephemera, as well as a Holiday Fair held in their Parish Hall.  Members of Duryee’s Zouaves 5th N.Y. Company D reenacting regiment took to the lawn outside St. Mary’s, creating a soldier camp and presenting musket-firing demonstrations. Tours were given at The Cold Spring Baptist Church on The Hill, where organ music was played by Norman Wright through the afternoon.

Event sponsors were Somers Orthopedic Surgery; Putnam County Visitors Bureau; Shoprite; Cold Spring Area Chamber of Commerce; Hudson Valley Magazine; Corvo; and Hudson Valley Federal Credit Union. “We have achieved all of the goals of the tour and now we have an annual holiday destination event on our hands; one that people come back to year after year,” said Otten, who added “The planning for the 2012 event is already underway so we hope to see everyone back again next year.”

Photos by A.Rooney, except Civil War reenactors by Ross Corsair