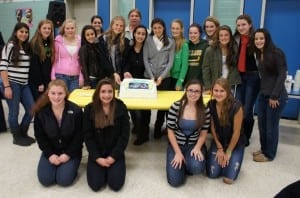 The Lakeland Board of Education honored the Lakeland High School Field Hockey team for winning the New York State Class B Field Hockey Championship, their third consecutive title, at its Dec. 8 meeting. The team has now won six state titles (1990, 2003, 2006, 2009, 2010 and 2011.)