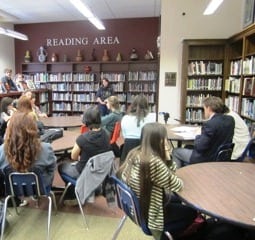 Alison Duncan performs her poem before a library-full of listeners

Poetry Out Loud returned to Haldane last week as10 high school students participated in this national recitation contest. Sponsored by the National Endowment for the Arts and the Poetry Foundation, in partnership with state arts agencies (locally, this is the New York State Alliance for Arts Education), the goals of the program include helping students acquire self-confidence and public speaking skills, as well as learning about their literary heritage. The program notes advise that:

recitation is about conveying a poem’s sense primarily with one’s voice.  In this way, recitation is closer to the art of oral interpretation than theatrical performance.  Think storyteller or narrator rather than actor … A strong performance will rely on a powerful internalization of the poem rather than distracting dramatic gestures.  The dramatization is meant to subtly underscore the meaning of the poem without becoming the focal point of the recitation. 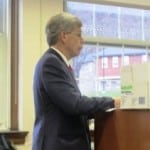 Coordinated at Haldane by English teacher Dr. Eric Richter, participants begin at the school level, and then advance in rounds, regionally, then state-wide and the state winner proceeds to the national finals, held in Washington, D.C.  The program began in 2006 and Haldane instituted it last year, a year in which 365,000 students competed nationally. Participating teachers received Poetry Out Loud curriculum materials including a teacher’s guide and an audio CD featuring sample performances of poems, along with a DVD of the national finals performances.  They also receive print and online poetry anthologies from which the students select two (at the school level) and then three (for those who advance beyond the school level) poems to recite. The students make their own choices (they can be advised by the teacher if they wish) from this extensive anthology, which covers multiple eras, styles, and lengths, with the shorter poems not necessarily being “easier,” as the students found out. 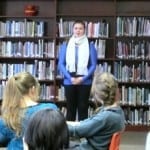 The emphasis is on understanding the text — the key to successfully interpreting the material for an audience. Students are advised on memorization techniques, including rewriting the poem by hand, from memory and reading the poem aloud just before going to sleep at night, repeating the exercise upon waking up. Things to avoid in performance, such as monotone, “the fidgets,” overacting and mispronunciation are also addressed.

Haldane’s Poetry Out Loud experience culminated in a performance at the high school library at the end of a recent school day. Judging the students was a team of three: Haldane Principal Brian Alm, English Department Chair Nancy Martinez-Cirelli and 10th grade English teacher Kelly McAvoy. They worked from a contest evaluation sheet which delineated six categories to judge: physical presence; voice and articulation; dramatic appropriateness; level of difficulty; evidence of understanding and overall performance.  Within those categories there was a six-point gradient, ranging from very weak to outstanding.  Each judge marked independently from the others and their tallies were then added to by Dr. Eric Richter’s separate assessment, which was solely the word for word accuracy of each reader, with differing levels of indicated deductions for minor (i.e. pluralizing a word) to major (skipping one line/three or more words in the same line = minus three points while skipping one stanza = minus six points).  Each time a student required the prompter, three points were deducted. 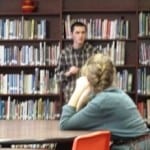 Dima Spinelli gets ready to read his second poem

In front of a crowd of about 15 of their fellow students, along with a few teachers, the participants introduced themselves, named their poem and poet and proceeded to read one poem each to start, then returned, after each had a turn, to recite their second.  Conor Austin led things off with Henry Wadsworth Longfellow’s The Arrow and the Song. He was followed by Conner Brennan, reciting Walt Whitman’s The Noiseless Patient Spider.  Others, who read alphabetically were Alison Duncan (Robert Frost’s Fire and Ice); Kiran Kalantri (We Real Cool by Gwendolyn Brooks); Lindy Labriola (William Shakespeare’s Sonnet 29); Cal Lane (William Yeats’s Lake Isle of Innisfree); Matt Marino (Ted Kooser’s The Abandoned Farmhouse); Jack Quigley (Decalogue by Ambrose Bierce); Dima Spinelli (Gerard Manley Hopkins’s As Kingfishers Catch Fire); and Alexander Stebe-Glorius (Battlefield by Mark Turcotte).

Some readers were soft-spoken, others gave it a bit more dramatic flourish.  Several had the words to both poems down cold, others faltered from time to time, but all showed an affinity for the poems they had chosen. 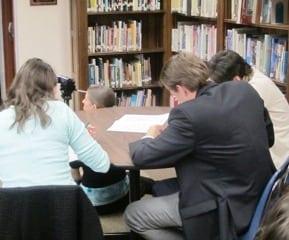 Conner Brennan, a senior participating for the first time, said that interacting with a poem in this manner gave him a different and deeper understanding of it. “I think when you recite a poem you break it down line by line and you make an image in your head for each line. That helps you remember it. You don’t get that just by reading it — at least that’s how it is for me.”

Three winning participants, named the following day, are Conor Austin, Lindy Labriola and Jack Quigley. They, along with alternate Cal Lane, will advance to the regional competition, to be held in Albany in February.  Should any advance further, the state finals, also held in Albany, will take place in March, with the nationals in May.

All of these students, along with others from the school’s Literary Magazine, have been invited, (through a sponsorship by Philipstown.info), to the next Depot Docs screening  of To Be Heard, which program notes describe as “Three teens from the Bronx tell their stories of friendship, love and struggle, and show how a radical poetry class can ignite change … whose struggle to change their lives begins when they start to write poetry.   As writing and reciting become vehicles for their expressions of love, friendship, frustration, and hope, we watch these three youngsters emerge as accomplished self-aware artists, who use their creativity to alter their circumstances.” They will be able to participate in the Q & A session afterwards with director Deborah Shaffer. As an extra-credit project they have been asked to give their reactions to the film in written form, be it a poem or an essay or anything else they choose. For more information visit www.poetryoutloud.org.
Photos by A.Rooney