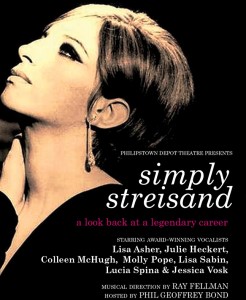 Cabaret in the Country returns to Depot Theatre

Cabaret in the Country, which debuted with Sondheim Unplugged a few months ago, returns, for one performance only, with Simply Streisand, a celebration of Barbra Streisand, her legendary career and the music she made famous. Music from her entire career will be featured: from the tunes she belted out in the small nightclubs of New York, to her 70‘s disco-infused period, straight through to the mega-ballads that have come to define her work. This performance, is a special Philipstown presentation of the long-running Off-Broadway cabaret series. Simply Streisand enjoyed a critically acclaimed run at New York’s Laurie Beechman Theatre throughout 2011.

The evening, as with Sondheim Unplugged, will hosted by director Phil Geoffrey Bond, who will regale the audience with special Streisand facts, rumors, tidbits, video clips and out and out gossip. Barbra Streisand is among the most commercially and critically successful entertainers in modern entertainment history, with more than 71.5 million albums shipped in the United States and 140 million albums sold worldwide. She is the top-selling female vocal artist in history, and has been awarded two Academy Awards, eight Grammy Awards, four Emmy Awards, a Special Tony Award, and many more accolades.

The evening’s featured singers include:

Bond is happy to be returning to the Depot with the second edition of Cabaret in the Country.  “When we brought the Sondheim show up, we just weren’t sure what to expect. It would have been tragic if we were up there doing it for three well-meaning patrons but as fate would have it, the place was packed. In fact, we sold out. It was a wonderfully warm and welcoming experience with some of the nicest folks in the audience anyone could ask for. The cast loved that little theatre every bit as much do I. So of course, we’re all looking forward to coming back to talk about Babs.”

The performance will take place on Jan. 15, at 7 p.m. Tickets are $25, and may be obtained by visiting brownpapertckets or by calling 1-800-838-3006 or the Depot Theater at 845-424-3900. (Notably, the Philipstown Depot Theatre and the immediately surrounding area was the filming location for the Yonkers scenes in the film Hello, Dolly!, which starred Streisand.)