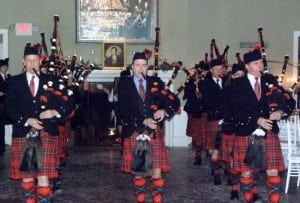 On a frosty night with snow freshly fallen, most people chose to hunker down before the television or computer screen, but a hardy band of Scots and Scots sympathizers gathered around the hearth, single-malt whiskeys in hand, to once again hear the ancient call of the highland pipes and to pay tribute to the Scottish poet whose work most embodies Scotland’s historical aspirations and longings — Robert Burns.

The snowstorm on Saturday, Jan. 21, brought a long list of event cancellations around town, but not for the Hudson Highlands Pipe Band’s annual “Burns Night” fundraiser, held at the Highlands Country Club in Garrison.  About 100 people, many (mostly men) wearing the traditional kilt, the fabric pattern signifying their familial clans, listened to the band play, the pipes at times seeming to expand the walls and floor, and heard various toasts marking Burns’ birthday (Jan. 25), celebrated around the world wherever those of Scots heritage assemble. 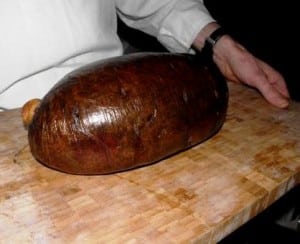 A portrait of the 18-century poet hung over the fireplace as Mark Civita, band president, and Seth Gallagher, pipe major, presided over the decidedly traditional festivities. Nick Groombridge read Burns’ poem To a Haggis before a ceremonial cutting of the famed meat dish by the club chef. Brian Cole offered an appreciative toast (each toast came with a different whiskey) to the man aficionados refer to as Robbie. Among the reasons Cole offered for honoring Burns was “that he gave voice to a proud and independent people who during his day were nonetheless being ground under the heel of England.” Cole spoke of his own Nova Scotia roots, which resulted from the flight of Scottish rebels in his family after their defeat in battle. Never a favorite of the English Crown, Burns also wrote poems in favor of the American and French revolutions and against slavery. Cole was also duty-bound to mention that Burns had a wandering eye when it came to women and was not shy about using his poetic gifts for seduction.

Groombridge pulled double duty returning with the “Toast to the Lassies,” which followed up Cole’s references referring to Burns as a “chick magnet” with quite a few romantic entanglements but also a father of nine children.  Groombridge riffed in his toast on what Burns might have written about had he lived past 37, including losing his keys on the train, dressing poorly and wanting to hang out with the guys.

The “Toast to the Laddies” by Melissa Libby Cole took a women’s perspective on desired male features at the age of 22 through the decades to 72. While the women laughed appreciatively, many a male head shook in rueful recognition of the toll the years take: “Age 52, keeps ear and nose hair trimmed, doesn’t belch or scratch in public, doesn’t nod off to sleep too often when I am venting … is in good enough shape to get off the couch most weekends … and remembers my name on most occasions.”

The pipe band featured some of its best players with piper James Hartford and drummer Milo Civita offering a short duet [CLICK HERE TO SEE VIDEO] and then a deeper dive into the mysteries of the pipes, with Stephen Gara and Ciaaran Smith engaged in a harmonic duel sweetly accented near the end by dancer Clare Shanahan.

The evening’s official festivities ended with the most famous of Burns’ works, the song (he wrote many) Auld Lang Syne, begun by guest singer Dar Williams and then taken up by the band as the audience held hands and sang. (CLICK HERE TO SEE VIDEO]

The warmth of the celebration lingered as people continued to dance and smile to the Celtic music of players Carl Radens, Dave Paton and Dylan Foley.
Photos courtesy of Hudson Highlands Pipe Band