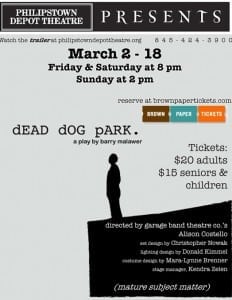 Barry Malawer’s play, dEAD dOG pARK, is just the kind of material director Alison Costello, of the Garage Band Theatre Co. (GBTC), likes to sink the company’s teeth into: it’s provocative.  “It will give the audience something to talk about on the way home — provoke conversation when the lights come up.  You can’t ask for more from theater.”  Based on a true incident (which occurred in Yonkers) the story concerns a white police officer who may or may not have pushed a 12-year-old African-American boy out a window. The lines are blurred as to whether he pushed or helped him.  Without revealing much, by the end of the play, the officer is questioning himself. The title refers to an actual park, located in Manhattan near the George Washington Bridge. Watch a short video promotion here.

The Depot Theatre, which is producing the play, was approached by Ric Apicella, one of Costello’s partners in GBTC, who “found” the play by attending its one previous incarnation, earlier last year. Sensing that the work had within it elements that could be brought out more, Apicella contacted playwright Malawer and, with his approval, then approached the Depot — a venue Apicella was familiar with from Aery Theatre productions — about giving the production another go.

Depot Theatre Artistic Director Nancy Swann has “always been a big fan of Apicella’s from his earliest performance in Richie Knipe’s Schooling Giacomo [seen at the Depot in 2008 prior to an off-Broadway run] to his own original plays produced by GBTC. So,” said Swann, “when I put out feelers for original plays for our 2012 and 2013 season, I was happy Rick had a submission. Both Amy Dul [Depot Theatre Executive Director] and I read dEAD dOG pARK and agreed the crisp visual writing was very exciting and the piece would work well on our stage. We submitted it to our play reading committee and were pleased they also thought the play was something we should produce. I was also interested in working with Alison Costello who directs quite a lot regionally. She has a reputation as someone who is easy to work with and also knows many actors in the area, which helps widen our talent pool.” Swann likes the idea of offering the Depot as a venue to playwrights, directors and actors as a place to showcase their work; adding, “This has been a very pleasant collaboration.” Costello, who holds a B.A. in Performance Theatre from Fordham and recently won the award for Best Play at the Harvest One-Act Festival in New York City for her play Wait and See What Happens, echoes Swann’s sentiments, “Everyone is so nice and collaborative — I think it’s great for us and for the theatre.”

Developing new (or, in this case, newish) pieces is a hallmark of GBTC. Named in part for the “odd places we rehearse,” the GBTC’s mission statement reads “[GBTC] is dedicated to empowering and inspiring artists to collaborate on both original and previously published work in a creative, innovative and unique way.” Another goal of their productions, as expressed on the GBTC website, is “to create that type of raw and intimate experience for our audience with suspense built from the pursuit of truth and excitement built from passion and love.” 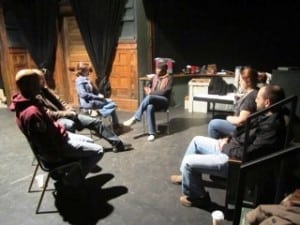 The cast at a recent rehearsal

In keeping with Depot policies, auditions were open to all, and the play was cast from the auditions. Some performers have worked at the Depot before, for example Mark Colvson, recently seen in GLEEful! is returning, playing a lawyer, while others are first-timers there. Apicella’s play Desire was the winner of Best Play at the 2008 Aery Theatre Festival, held at the Depot, while Costello was nominated for the Best Actress award for that production. The production team of Chris Novak (set) and Donald Kimmel (lighting) are Depot regulars, and assistant director Robin Peck was also seen at the Depot in Schooling Giacomo.

Playwright Barry Malawer has also penned two other plays. His previous effort, Cadillac, was developed at the Blueberry Pond Arts Center, Ossining, in Jeffrey Sweet’s Monday Night Workshop. It was subsequently produced by the Supporting Characters, at The Bendheim Performing Arts Center in Scarsdale.  His first play, Chrysler, was produced at Manhattan’s Pelican Theatre.

Two weeks into the rehearsal process (at the time of this writing), director Costello was already discovering more about the play as the actors and creative team worked on it.  “This play is very smart, in the way it’s written,” she said, “It makes the audience think without thinking too much — you become totally invested in every character.”  Costello also praises the pacing, “There are ten-page scenes which just fly by — the pacing is amazing.” In just its second production, there are still small changes and tinkering with this still-new material and Costello says that there has been a perfect relationship between playwright and the creative team, with Malawer “entrusting it to us” and in turn being consulted in a “we’re thinking about doing a little trimming here, is that okay?” kind of collaborative way.

The balance of the cast includes Stavros Adamides, Tracey McAllister, Suzanne Blair and Ildemar Lagares.  Costume design is by Mara-Lynne Brenner and Kendra Zeien is the stage manager.

dEAD dOG pARK runs from March 2 – 18.  Performances are at 8 p.m. on Fridays and Saturdays, 2 p.m. on Sundays. Costello says the show is suitable for those approximately 15 years of age and up, with adult themes and language.  Tickets are $20 for adults and $15 for seniors and those under 18, and may be ordered at http://www.brownpapertickets.com/event/222260