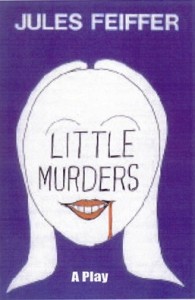 World’s End Theatre continues its series of “20th century classic” play readings with a performance of Jules Feiffer’s Little Murders Saturday, Feb. 25 at 8 p.m. at the Philipstown.info space at 69 Main Street. The play is set in of the late 60s; a city in urban decay, rife with muggings, unsolved sniper shootings, strikes, power outages and obscene phone callers.

The plot concerns Patsy Newquist, a successful 27-year-old New York City interior decorator who brings her photographer fiancé home to meet her dysfunctional family in their Upper West Side apartment. Patsy is the pride of her family, exuberant, and optimistic: one who, as Feiffer writes, “finds all dreams attainable if one just has the get up and go.” Patsy is a winner in every aspect except in her love life. After a string of failed relationships, she is determined to make this one work. Alfred, however, is the exact opposite. He’s an apathist, [sic] a passive guy who navigates the fear and paranoia in his life by tuning out. Patsy’s family wants her to get married, but doesn’t want her to settle. It’s a crazy concoction of quirky characters trying to survive an increasing chaotic world bearing down on them.

Director Andre Herzogovitch recalls seeing the film version of Little Murders on cable television “maybe 7 or 8 years ago and being blown away by it. What attracted me was its familiarity, its messiness, its cacophony and uncomfortable silence, paranoia, isolation, and moments of tenderness.  All the ingredients that made up life in the city that I remember growing up in during the 70s – – and I felt devastated. Feiffer really nailed the workings of a dysfunctional family: the competition, resentment and miscommunication; the avoidance of painful situations. One of the major themes in the play is fear and how it overwhelms each character in different ways. What lengths do we go to protect ourselves from real and imagined threats. What makes the angst bearable is the desperate, eccentric characters throughout, and the sympathy and humor Feiffer gives them.”

Herzegovitch calls Little Murders “a satire on American society that I think is still relevant today, especially in post 9/11 America. The color- coded alerts. The literal incorporation of a surveillance society. The casual acceptance of violence as a means of problem solving. The gradual surrender of cherished civil protections for a false sense of security. The knowledge we all have about it, yet like many of the characters in the play, we feel overwhelmed by the enormity of it. If the audience comes away with anything, hopefully it’s a laugh at the mess we are all in.”

Admission is free, but seating is limited and reservations are highly recommended. Previous readings in the series have played to full houses. To reserve, call 845-809-5584.