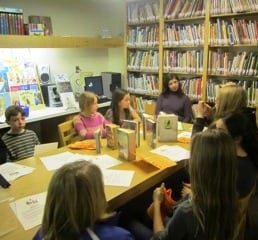 The Battlers-to-be meet their books

Some battles never die down, and instead gather in strength through the years. Such is the case with the Battle of the Books (BOB), a national program which has solidly taken root regionally. Butterfield Library, which has participated for seven years now, is one of 25 regional teams set to take part in this year’s program. An initial meeting for those 5th to 8th graders interested in becoming 2012 team members took place last week at the library.

The Battle of the Books began in 2005 with five participating libraries; 50 students participated — by 2009 it had grown to over 200.  The original goals of the program have stayed the same, to expose children of this age to excellent age-directed literature, to help them develop good teamwork skills, display sportsmanship and overall enjoy a positive experience with reading.  A statement about the program from the 66-member Mid-Hudson Library System (MHLS) reads:

Libraries often struggle to attract teens and then to find positive ways to keep them returning to the library. In today’s world there are many demands on teens’ time and reading for pleasure often takes a back seat to the many other activities available to them. By offering teens a program that keeps them reading over the summer, libraries support the local education system. Battle of the Books provides an opportunity for teens to maintain their literacy skills while working together with other young people on a common goal in a spirit of friendly competition. Studies show that students who read for pleasure over the summer, return to school in the fall having maintained or improved their literacy competence. A reading competition program also offers teens an alternative outlet other than organized athletic activities, to increase their self-esteem and be successful in the arena of competition.

Butterfield began participating in the program one year after its inception, and, quite auspiciously, for a small library, won the Mid-Hudson “Battle” for two years running, 2007 and 2008. Recruitment for the team begins with an initial informational meeting, at which time the days and times for future meetings are set, the program explained and permission slips signed. Last Wednesday’s meeting attracted a mix of first time participants and returnees from last year. The returnees included Aidan Cimino, V.J. Fina, Amelia Hall and Nicole Mitchell. Fina animatedly described the program to the newcomers, saying “It was a really fun experience for the 5th graders. You can walk down from school [to Butterfield] with friends, come a half hour early and get homework done. At the end, everyone hangs out longer.” 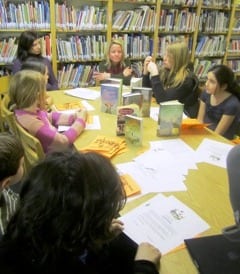 The Library's Maureen McGrath and Johanna Reinhardt explain the program

Butterfield’s Program Director Maureen McGrath and Library Assistant Johanna Reinhardt sat with the group and explained how the program works. Meeting once a week through spring and summer, team members read eight books selected by representatives of the participating libraries. Each team member reads every book, and the books are read in the same order by all, so at the meetings everyone can talk knowledgeably. After the books are discussed, games are played and sometimes other, fun activities take place, such as eating foods connected with a passage in the book.

During the summer, mock trivia “testing” goes on with practice questions, and several “mini-battles” with nearby teams take place, giving good practice opportunities for the big battle, which this year takes place on Sept. 8, at Arlington High School in Poughkeepsie. Prior to the battle the team gives itself a name, and designs the all-important team tee-shirts (discussions over this year’s potential color accounted for a great deal of animated conversation towards the end of the introductory meeting. Seems the team’s traditional choice of orange is out this year and green is in.)

The Battle itself takes the form of a bracketed, double-elimination competition, with each team guaranteed of playing two 25-question rounds and advancing throughout the day, to a final showdown. Teams field 5 players, and as teams are often larger, players flow in and out. Questions, submitted by all of the member libraries are asked by a moderator and team members use a buzzer when they think they know the answer. McGrath, who has come up with some questions in the past, says that the “questions tend to be as vague as can be so as not to be obvious, but specific enough to only be about one particular book.” The first team member to buzz in is called on to answer the question within 10 seconds after the emcee acknowledges him/her and may confer with teammates.  The answer must contain the full title and full author’s name. If the first teams answers incorrectly, their opponents get a chance.

Those students showing a commitment to the team each receive their own copy of every one of the eight books. This year’s books, as usual chosen from a variety of genres, are:

Hidden amongst the excitement of the competition is the goal of exposing young readers to books they might not normally choose. This goal was achieved with returning team member Nicole Mitchell who said, of last year’s selections, “With some of the books, if I saw them in a library, I would never pick them up and read them, but when I actually read them, they were good.” The kids at the meeting made their first group decision, choosing Magician’s Nephew as their first book to read.

There is still time for interested children to join up; contact Maureen McGrath at [email protected] or phone her at the library: 845-265-3040. They may feel as returning team member Amelia Hall does in describing why she enjoys participating: “I really enjoyed reading all the books, and also talking about them.  People often don’t like to talk about books, but I like talking.”
Photos by A.Rooney

Members of this year’s Battle of the Books team will be publishing book reviews which will appear on Philipstown.info.  Look for the first report, from Mae McGrath, in late April.