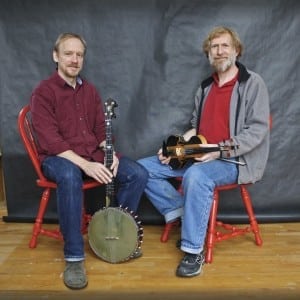 Harry Bolick and Joel Wennerstrom will be performing as an “old timey string band duo” in celebration of the release of their new CD, The Pleasure of Your Company on Saturday, March 24 at 8 p.m. at the Depot Theatre. For more information and to view performances and listen to the music CLICK HERE.

Bolick (on fiddle, vocals and mandolin) and Wennerstrom (banjo, vocals, guitar) describe their music as “Hard driving southern fiddle tunes, lyrical country blues, and tight harmony singing to weave a spellbinding performance interlaced with a bit history, a flavor of southern culture and the joy of music.”  A 30-year veteran of the New York “old-timey” music scene, Bolick has mastered a variety of local fiddling styles from the Southern states in a multitude of differing tunings, and has collected and composed a large number of contemporary fiddle tunes in traditional styles. Born in Mississippi, he has learned, loved, recorded, and taught the classic fiddle tunes from Carroll County, Miss. He now has seven recordings to his credit.  You can read his full bio HERE.

Wennerstrom has previously recorded with Rhys Jones and Cleek Schrey as Hammer and String – “The Girl Who Broke My Heart.” In his words, “Claw-hammer banjo has been a main focus for me since moving from Ohio to New York City in 2001. I perform with numerous old-time and contra dance musicians in the area, and was a founding member of Two Lost Turkeys old time string band (formerly The Moonshiners).

During and after the Civil War, players of banjo and fiddle came together and reshaped the stock of Scots, Irish, English, French, Scandinavian and German tunes into a distinctly American and Southern form. In addition, the collision of African and Celtic musical traditions provided a source of innovation that continues to this day. Southern string band music has been in revival since the late 1960’s when a new generation of players adopted the music. Today there are many thousands of passionate players of varying abilities creating and reshaping this vital American social and art form. It is somewhat rarely heard in a concert setting but is alive and well at dances, festivals, jam sessions and living rooms. Also in the mix of early Southern music are the “parlor” songs from an early version of Tin Pan Alley, gospel songs from the religious revival of the 1800’s and blues songs and lyrics from the early 1900’s. Before the revival in the 1960’s, this music was last heard on radio shows like the Grand Old Opry and commercial 78 rpm records.  In other hands, this old-timey Southern string band music became one of the elements forming bluegrass and modern country music.