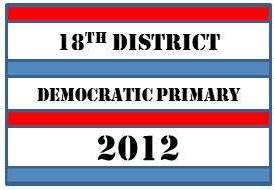 All agree on incumbent’s faults

Republican Congresswoman Nan Hayworth’s ears must have been ringing last Thursday night (March 29) as four of the five Democratic candidates running to unseat her took turns pillorying her votes in the House of Representatives, her adherence to Tea Party principles, and what they collectively asserted was her disingenuous dealings with constituents. Among the specific charges they leveled against Hayworth:

The event was a forum sponsored by the Putnam County Democratic Committee, held in the Mahopac Public Library meeting room. Not surprisingly, the heated partisan rhetoric played well before a room full of party activists who must decide which of them to support in the recently scheduled June 26 primary. 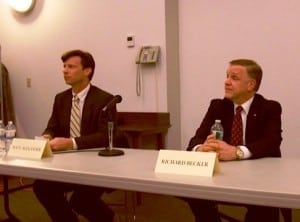 The candidates, all male, are running in a newly drawn congressional district that includes all of Putnam County, slices of northern Westchester and southern Dutchess Counties and a wide swath of Orange County on the west bank of the Hudson. Hayworth, who defeated Democrat John Hall in 2010, is considered potentially more vulnerable because the new district now includes the more Democratic-leaning areas of Newburgh, Beacon and Poughkeepsie instead of more Republican areas of Rockland County.

The new 18th district (including Philipstown) was carved out by a federal court after the New York State legislature couldn’t agree soon enough on either new lines or the date for the state’s primary elections.  The 2010 census resulted in a loss of two New York seats, down to 27, in the 435-member House of Representatives, creating fierce infighting between the state’s main political parties, and inside their ranks as well, over the boundaries for the smaller number of districts. (At one time New York had 45 seats in Congress.) The federal court’s rulings settled the issue, drawing lines thought by many to be more competitive and therefore less protective of incumbents from both parties. 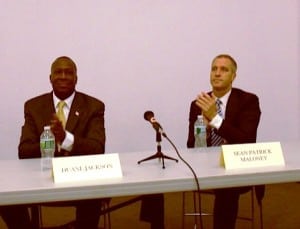 Adding to an already confused political landscape, while the court set June 26 as the congressional primary date (for all political parties), the state legislature could not agree on moving the date for state races and retained a September date for those primaries. Typically primaries are low-voter- turnout affairs, so having two different dates (not to mention a Republican presidential primary on April 26) will present even more difficult challenges to the various campaign organizations to get supporters to the polls.

Given the new lines and date and general public disdain for all things congressional, the winner of the 18th district Democratic congressional primary will likely be the candidate with the best get-out-the-vote operation and/or support from politically active interest groups that supply money and volunteers to campaigns.

Although the next 90 days will require endless campaigning across a large territory, there was no shortage of enthusiasm for the effort among Wappingers Falls Mayor Matt Alexander, Cortlandt Councilman Dr. Richard Becker, city planner and vendor-owner Duane Jackson and Manhattan attorney and former state and federal official Sean Maloney.  Tuxedo Park Mayor Tom Wilson was unable to attend.

For the most part the candidates hewed closely to the Democratic campaign playbook emphasizing domestic economic issues such as job creation, infrastructure repair, protection of Medicare and Social Security and an income tax system that shifts more of the burden to wealthier citizens and off the middle class. The two-hour format included opening and closing statements and, in between, written audience questions.  The candidates were quite civil, more often agreeing or following up a point made by another rather than really arguing policy questions with each other.

More emphasis was placed on differences in experience and relating that experience’s value toward success in defeating Hayworth and success as a congressman.

Becker, a cardiologist, clearly relished the prospect of a doctor-against-doctor race with Hayworth, an ophthalmologist, (“it will draw attention to the race”) but he also tried to position himself as the only candidate who had actually created private-sector jobs through starting businesses, including medical practice groups — a difference to which all his opponents objected, recounting their own job-creating initiatives.  Becker also positioned himself as someone capable of “crossing the aisle” to work with Republicans — “you get more done with honey than vinegar.”

“I am running as a mayor,“ said Alexander, who heads a village government for 5,000 people. He stressed his ability to create coalitions within disparate communities to get things done, including infrastructure upgrades and better services for those most in need. “Send someone (to Congress) from the grass roots … someone who knows what it’s like to work with people in the Hudson Valley,” he said.

Duane Jackson, Buchanan resident, city planner, Vietnam veteran, owner of food stands in Manhattan, and famous for his alert to police about a car that turned out to contain explosives in the Times Square area, most closely identified himself with security issues and law enforcement.   As part of his response to “Tea Party infestation in the Hudson Valley,” he also emphasized his belief that Republicans (including Hayworth) were seeking to limit voting rights for minorities and senior citizens with new restrictive regulations in various states.

Touting his service as a senior Clinton White House official as well as an aide to Governors Spitzer and Patterson, Sean Patrick Maloney spoke of his capacity to create the broad political coalitions (including unions) and garner the organizational and financial support necessary to take on a well-funded Republican opponent. “I am the only candidate who has been trying to elect Democrats for 20 years,” he said.  Maloney ran statewide for attorney general in 2006, a race now-Gov. Andrew Cuomo won.

As the race proceeds, Philipstown.info will seek to interview and profile each of the candidates separately, subject to their willingness and availability.  Please share your own views of the candidates as the primary race unfolds.
Photos and videos by K.E.Foley