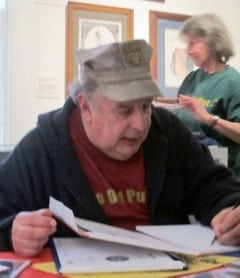 Talk at Historical Society of Forgotten but Remembered Railroad

Railway enthusiast and retired teacher Joe Schiavone presented a talk, accompanied by vintage film footage on The New York and Putnam Railroad, more commonly known as the ‘Old Put’ on March 24 at the Putnam County Historical Society as part of their Bicentennial lecture series.  Stretching for 58 miles on a single track, the railroad, which began in 1894 operated between Sedgwick Avenue in the Bronx through to Brewster.  In 1958, for a variety of reasons which Schiavone delved into, the railroad suspended passenger services operations, and hauled only freight, before shutting down completely by 1981.

Originally powered by steam, the line, hilly and forested, later switched to diesel, the last steam run taking place in 1951, when the Major Deegan Expressway was built.  The original purpose of the Old Put, upon its post-Civil War construction, was to bring goods from the many farms dotting Eastern Westchester and Putnam down to the city.  The line was a way of getting things to market. Even through the late 1940s Schiavone described scenes of cartons of eggs being loaded directly onto the train, and pigs loaded from corrals to the train via ramps.  Over the ensuing decades the emphasis shifted, partially, to commuter service with the advent of post-WW II home-building throughout the area.

Schiavone, obviously still enthralled by a subject he has been researching for decades now, told the packed room that “The Put has been in my life since I was three years old and my dad put me in the caboose at Granite Springs.  At nine I took my first steam locomotive ride, between Granite Springs and Yorktown Heights.  I grew up along the railroad and saw the daily operations.”

Introducing the footage, all shot by fellow train enthusiasts for their own personal collections while the trains were running, Schiavone noted its value, saying “We are so lucky to have photos, but movies really bring history to life.  These guys took the pictures for their own enjoyment.”  Most of the footage shown dated from the forties and fifties, and was shot in both black and white and in color.  Many in the audience voiced recognition as Schiavone pointed out landscapes once undeveloped, through which the rail line traveled.  Many of the features now seem almost quaint, such as the description of traffic in Elmsford being held up as the train went by on the single track, or the train engineers stopping the train in a field to pick up signaling passengers. The actual station stops included Highbridge, Morris Heights, University Heights, Kingsbridge, Van Cortlandt, Lincoln, Dunwoodie, Bryn Mawr Park, Nepperham, Nepera Park, Grey Oaks, Mount Hope, Chauncey, Ardsley, Woodlands, Worthington, Elmsford, Beaver Hill, East View, Graham, Briarcliff Manor, Millwood, Kitchawan, Croton Lake, Croton Heights, Yorktown Heights, Amawalk, Granite Springs, Lake Mahopac, Mahopac, Crafts, Carmel, Tilly Foster, and Brewster.  There were a few offshoot spurs as well. 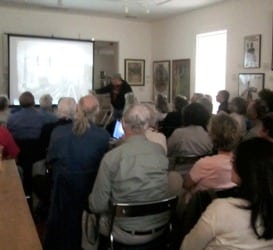 Schiavone points out details from footage shot during the heyday of the 'Old Put.'

As picturesque as the rides were, they were also slow, hampered by the topography of the land, hilly and filled with severe “S-curves.” There were never more than five or so cars used on the line, again it was too difficult to haul the cars uphill, especially through the Putnam County portion of the run.

Sustained usage was also diminished by the end terminus being not in Grand Central Station like the Harlem and Hudson lines, but instead at Sedgwick Avenue in the Bronx, from where passengers needed to climb up a steep set of stairs, traverse an overpass and transfer for a train into Manhattan. Then again, there were times, during heavy snowfalls when the Old Put, operating on steam, then diesel, could run, while the Hudson and Harlem lines, having to go into electric territory, were delayed.

Detailing the reasons for the Old Put’s decline, as well as the Bronx terminus; the slow speeds; delays caused by the single-track, which lacked a signal system, therefore slowing speeds to safer levels and incurring delays; lack of parking near the stops, old equipment (the oldest coaches always being assigned to the line) which was drafty in winter, boiling in summer; not enough service during commuter hours; the construction of the Major Deegan, and the fact that most of the rail line ran in the middle of nowhere, away from population centers, with most people living closer to the river or near Brewster.

Business from the military helped the freight service during both World War II and the Korean War, with the trains being used frequently to haul oversized equipment, which could protrude from the railcars without the concern of it being damaged by trains coming in the other direction.  There was mail train service as well, with Schiavone describing a scenario of a letter being dropped off in a mailbox on the side of a car at one of the southern stops at 8:15 a.m. and arriving in the Brewster Post Office, ready for collection by 10:45 a.m.

But it didn’t last. The morning after the last passenger run, in May 1958, the New York Times had this to report:

Commuters blamed unimaginative railroad officials for not having put new life into the line by running trains into Grand Central Station rather than ending the line in the Bronx.  The officials retorted that the line was just one more victim of the automobile and thruways.

Freight service to and from Yorktown continued through 1980 or 81 having ended about 15 years earlier further north. Still, it evokes for many, a different way of life, as embodied as this tale Schiavone related, from his youth:

In the 1950s I could ride my bike up to Granite Springs, catch the 9:30 a.m. mail train, ride it up to Brewster, get off, walk to the Cameo Theater in Brewster, where from noon to five I could watch cartoons, serials and a double feature, and ride back on the train with my bike. … We were lucky to have it for almost 100 years.