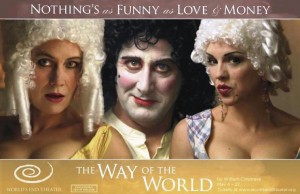 World’s End Theater is back at the Depot with a juicy Congreve comedy; ‘Nothing’s as funny as love and money’

Set in a world defined by masks, wigs, theatricality, stealth and lots of aiding and abetting, William Congreve’s The Way Of The World, first performed in 1700, is about to be revealed anew through the World’s End Theater’s (WET) about-to-open production at the Depot Theatre.  World’s End’s inaugural production, Chekhov’s The Seagull, a year ago, was an entirely different, more somber (albeit with moments of merriment) affair.

Teaser for the ‘Way of the World’
he Way of the World
, while not farcical in the manner of some of its fellow Restoration comedies, has “a plot as intricate as any great romantic caper to come out of Hollywood,” according to its director, John Plummer, who also serves as artistic director of the company.  “There’s a tremendous amount of subterfuge, with everybody plotting against each other, and these plots unfolding and unraveling.  Oh — and a lot of sex, too, in the form of innuendo.  It’s a naughty, but family-friendly show, because everything is in the language,” says Plummer, who adds that “It’s fresh as a daisy, because all of the characters are hilarious and they all want what everyone still wants: love and money, sex and security.  There’s a ton of lust in the play and it’s very funny, because everyone has desire, but it ultimately comes down to the desire to be secure.”

A succinct plot description may be baffling — “Mirabell, a man lacking money, has an affair with Mrs. Fainall, daughter of Lady Wishfort.  However he has devised that she marry Mr. Fainall, to prevent the scandal of pregnancy.  But Mr. Fainall is a money-grasper, wanting Mrs. Fainall’s fortune to enhance his affair with Mrs. Marwood. Then Mirabell falls madly in love with Lady Wishfort’s niece, Millamant, causing Millamant’s fortune to be jeopardized, as Lady Wishfort (a scenery-chewer) is none too fond of Mirabell.  Mirabell concocts a sure-fire scheme, involving his valet, Waitwell (newly-wed husband of Lady Wishfort’s maid, Foible) to turn things his way. A scheme involving disguises, seduction, false uncles, much primping.  What ensues is laced with lost and gained fortunes, testimony from servants, blackmail, suitors, scandal, triumph, heartbreak. Meanwhile, Mrs. Marwood is now in love with Mirabell, et cetera, et cetera, et cetera….and that’s just the first couple of acts!

Filled with fops, fancy ladies and gents, their under-miners and their un-doers, director Plummer sees The Way Of The World as ultimately a valentine to the theater itself.  At the first rehearsal, he gathered the cast and creative staff and began his remarks with a quote from Chagall, “Art must be about love or nothing.”  Continuing, he expressed his take on the writing, “This play is all about theater and love — about accentuating the theatricality of the world. … All theater is pretense, deception, lies.  Let’s pay attention to artifice — it’s all a lie, it’s all the truth, it’s both — to reveal the truth in the play.”

Costume design drawings by Charlotte Palmer-Lane
As such, the design elements of the show were configured to express and exploit theatricality: in the set design of Dana Kenn, the small alcove right after the audience enters, will have a platform built on which will be a make-up area. The backstage dressing rooms, normally masked off, will be viewable. There will be footlights at the front of the stage, as well as a proscenium arch, columned and curtained, moveable. Costume designer Charlotte Palmer-Lane described her designs as “’stylized Restoration: rich in color, with some text lettering in the fabrics, and fun, brightly-painted shoes.  The costumes will suggest suppression and expression, exemplified by the corsets.”

Make-up designer and cast member Jenn Lee noted that there would be make-up specific to each character, with instructions for each performer as to how to apply it.  Michael Mell, the lighting designer, told the group that “the lighting won’t be keyed to obvious cues.  It will be three-dimensional, and filled with color.”  Plummer sees the design as “A seduction; at the beginning it’s all romance and mystery and you’re not sure what’s going on.  As the audience is drawn in, the set and lighting will frame, then reveal, opening up more and more as the play does.” (All of these intentions are subject, of course, to change throughout the fluid rehearsal period.)

Plummer likens his own discovery of The Way Of The World, which is little-produced — certainly compared to other celebrated plays written close to its period — to “going to a garage sale and finding an incredible treasure for which they’re only asking a dollar — or an original Luke Skywalker action figure for a quarter! … It’s like, ‘where has this been hiding all this time?’  We just started rehearsals [at the time of this interview] and everyone’s so excited because of the crackerjack script.  A lot of great plays become lost because there aren’t enough passionate living artists able to take the time to find them.”

Producing plays like this is the goal of the World’s End Theater Company, as Plummer explains, “The reason WET was founded was because of a love of the classics, these great plays that aren’t bound by space and time.  We want them to be done now because they’re completely relevant.”  The nonprofit group, includes a board and artistic associates** filled largely with members of the local community who are professionals in the arts. WET’s productions operate under a special Actors’ Equity contract, and usually feature a mix of union and non-union members in terms of the cast and creative staff.  In this production there are nine Equity cast members involved, almost all of whom live locally.  The creative staff is largely union, in their respective organizations.

Plummer says that the emphasis of this production can be found in the third line of the script: “I’ll play on to entertain you.”  “That should be the sole purpose of any entertainment, really.  To me, you’re tired, you worked hard, you want to see beautiful people, beautiful clothes, and a beautiful script.  That’s what we hope to give the audience with The Way of the World.”

The Way of the World opens at the Depot Theatre on Friday May 4, and runs through Sunday, May 27, with performances on Fridays and Saturdays at 8 p.m. and Sundays at 4 p.m.  There is no performance on Friday, May 11, and there is a Thursday night performance on May 24 at 7 p.m.  Tickets cost $25 for adults, $20 for students and seniors and can be ordered through Brown Paper Tickets. or by phoning the Depot Theatre at 845-424-3900.  For more information on World’s End Theater visit their website.