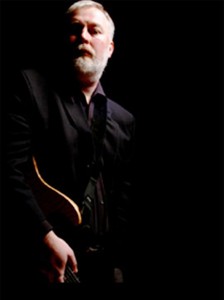 Will play at the Silver Spoon

Chicago guitarist Paul Kogut makes a rare Hudson Valley appearance at the Silver Spoon located at 124 Main Street in Cold Spring, on Friday, May 4 at 8 p.m. Joining him will be Hudson Valley-based musicians Mike Goetz on bass and Edward James Murphy III on drums. Admission is free.

Kogut can be seen in this clip playing with Mike Goetz on the standard Like Someone in Love, as recorded in the fall of 2010 for the Yorktown-based Guitar Show hosted by Mike Byrnes

Kogut holds a Master’s Degree from Manhattan School of Music and has served on the jazz faculty of Hamilton College. Hiro Yamanaka of Jazz Guitar Book Japan calls Paul “a great player with a contemporary style” and Cadence Magazine says the music of Paul Kogut “might just be the prescription needed.” The Chicago Tribune says, “There’s no question that Kogut stands as a serious player with a sophisticated sense of harmony and a penchant for meticulously honed motifs.”