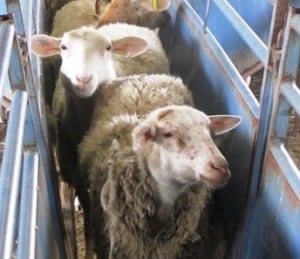 Many young families visit the farm for homespun activities

Glynwood Farm’s beauty is increasingly accessible to local residents through its open, community events.  As a working farm, the daily operations have to take priority, but events such as the Annual Sheepshearing Day allow visitors to enjoy the stunning, pastoral setting, replete with goats in a pasture, bales of hay near an old barn and vistas, small and large, around every bend.

Sheepshearing Day is timed to show off the first shearing of the yearlings, most of whom are around 14 months old.  In Glynwood’s large “new” barn, pens were filled with these very vocal wooly creatures and a resounding chorus of Maa and Baa filled the space.  As children gathered round, each sheep was shorn.

A Glynwood shearer explained that the whole art of shearing is to get the sheep into a position where they feel they can’t move.  This entails adjusting the animal so that the legs are slightly off the ground, and the sheep isn’t sitting on its tailbone, “which they don’t like.”  These sheep (and there were older, larger ones on hand too) get shorn just once a year, which is common, although some breeds of sheep require twice-yearly wool removal.

On the fringes of the sheep action, a Glynwood volunteer gently held a baby goat in her lap, much to the delight of the many young children passing by.  A passel of pigs, in their pens, paid no attention whatsoever to the proceedings, sleeping their way through the afternoon.

Elsewhere, scattered round the property, were farm-related activities conducted by Glynwood’s Carolyn Llewellyn, designed to introduce children to the life of a farm, and, specifically, to what goes on at Glynwood Farm.  Included among these were hook spinning — using wool shorn from the sheep just minutes earlier — and butter-making participatory workshops, and fun stuff like sack races and haystack scrambles. 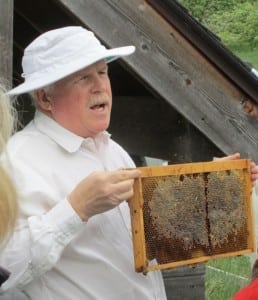 Rodney Dow doing a show and tell on bee-keeping

In the orchard, Garrison’s Rodney Dow gave a talk and demonstration about bee-keeping, making sure to guide those watching to a point away from the “bee-line” — the straight line bees fly between the hive and food sources.

Dow explained how he came to situate these hives, “Bees are stimulated by sunlight and temperature, so we set it in the field in a southeast direction.”  He also discussed the history of the man-made moveable hives, which date back to 1851; “before that point,” Dow explained, “they were calls skeps and made of straw.”

In the courtyard near the Main House, the Sleepy Hollow String Band entertained all afternoon, and Blackberry Hill Farms displayed a variety of woolen goods and annual plants for sale.  Inside, Cold Spring’s Ruth Eisenhower used her spinning wheel while Shasta Crombie explained how to turn raw wool into felt. Tours of Glynwood’s garden, greenhouse and high tunnels completed the program.

For more information on Glynwood, its mission and its Community Supported Agriculture (CSA) program with local distributions of produce, eggs and meats, visit their website.