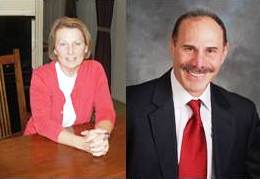 Two former Philipstown Town Board members, both residents of Garrison, are vying to succeed retiring District 1 Legislator Vincent Tamagna in the Putnam County Legislature in this year’s election. Barbara Scuccimarra, a Republican who lost her bid for re-election to the Town Board last November, and Steve Rosario, a Democrat who served on the board 1994-98. Because of term limits, Tamagna is in his last 3-year term on the nine-person County Legislature; for months, he’s been rumored to be in line for a senior administrative post, such as heading county planning.  Rosario beat Tamagna in the 1994 race for Town Board but, after deciding not to seek another term there, lost to Tamagna in a race for County Legislature after that.

Unveiling her plans in an e-mail to Philipstown.info Sunday evening, Scuccimarra said that “my campaign is about a new direction for county government. It is about what is right for the people of Philipstown and Putnam Valley.”  She noted that she grew up in Putnam Valley before later moving to Garrison, “where as a wife and mother I know the pressures felt by our families.” She pointed out that she has already worked inside the Putnam County government, as a member of a committee on fiscal vision and accountability and another dealing with the Butterfield property, where the county has expressed interest in taking office space. “One of my greatest strengths that I bring to the table of the legislature is my working relationship with both sides of Putnam County,” Scuccimarra said. “When elected, I plan to continue expanding and nurturing these relationships to improve our local community.”

Declaring his candidacy May 16, Rosario said he brings “a varied background to the position of county legislator, which can only strengthen the town’s representation with Putnam County.” Trained as an attorney, he is senior Northeast regional director for the American Chemistry Council, a trade association. “As county legislator, my goal is to have Philipstown — Cold Spring, Nelsonville, Continental Village, Garrison, North Highlands and Putnam Valley — equally and fully represented by the county,” Rosario said in launching his campaign. District 1 takes in part of Putnam Valley, as well as Philipstown.

Among accomplishments while on the Town Board, Rosario listed creation of the Philipstown Town Park; making Philipstown a Greenway community; helping to draft the town steep-slopes law and dirt-road policy; getting Garrison’s zip code extended to Continental Village, permitting Continental Village residents to obtain state services at the Putnam County rate, as opposed to the Westchester County rate; increasing town governance openness through videotaping of Town Board meetings; and working with businesses along Route 9 in regard to planning. “I look forward to a spirited campaign,” he said, pledging that “my campaign will be based on the issues, the qualifications of the candidates and the ideas that can best serve the citizens of Philips town and Putnam Valley.”

Scuccimarra also cited her experience on the Philipstown Town Board. As the lone Republican during her tenure there, she was known for her amicable relations with board Democrats and often voted with them. Being on the board “allowed me to see firsthand what’s important to the people of western Putnam,” she said. “Taxes and spending need to be kept at minimum; services must be maintained and improved.  We need to protect the natural beauty around us in a balanced and efficient way.” Summing up, she emphasized that “I am committed to continue to work hard for this community” and “looking forward to this opportunity.”  In pursuing re-election to the Town Board last November, Scuccimarra ran on a Republican slate. She and running mates Lee Erickson, the candidate for supervisor, and Katie DeMarco, another board contender, lost to Democratic incumbents Supervisor Richard Shea and Town Board Member Nancy Montgomery and challenger Dave Merandy, a board newcomer.

Exactly when Scuccimarra and Rosario first face off remains unclear. Tamagna told Philipstown.info on Wednesday that he still wants to become county planning commissioner. However, he added that he expects the position to be advertised and anticipates going through the same resume-submission, interview, and application process as anyone. He also said he that he believes the County Legislature intends to send County Executive MaryEllen Odell a directive outlining legislative ideas for the Planning Department before anything definitive happens. All that means no action is likely before late June or July, he said. So, for now, he remains in his District 1 slot. “I’m not going to leave the County [Legislature] unless I can move into a position,” he said.

If Tamagna relinquishes his legislative seat before November, the Legislature could ostensibly appoint an interim District 1 legislator – perhaps Scuccimarra — sources in both parties observed on Wednesday. Interim appointments can give an appointee a leg-up on election to a full electoral term. One member of the Legislature, Roger Gross, representing District 6, was appointed this past January. Eight of the nine legislators are Republicans.

“The election will be in November” but “I may be appointed earlier if the legislators vote” on arrangements for “a new job for Vinny,” Scuccimarra said Wednesday. Rosario opposes an interim appointment. “I believe there should be a special election for vacancies,” he said. “I think I’d rather have the citizens of Philipstown choose than seven members of the County Legislature.”