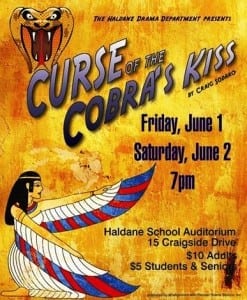 Haldane Middle School to be performed Friday and Saturday

This Friday and Saturday, June 1 and 2, Haldane drama presents its annual middle-school play.  In an echo of last year, so many students auditioned that two casts were assembled and each cast will perform for one night.  It will be performed at 7 p.m. each evening, and tickets, ($10 for adults and $5 for students and seniors,) will be available at the door.

Director Martha Mechalakos is urging everyone to “come see Curse of the Cobra’s Kiss, a silly, over-the-top spoof of Agatha Christie murder mysteries. These enthusiastic middle-schoolers are doing a terrific job. It promises to be a very entertaining evening for all ages.” How could it not be with a cast of characters as vividly described as those actors cornered at a recent rehearsal do right here?

The casts of ‘Curse of the Cobra’s Kiss’

In the words of assorted sleuths and matinee idols and even a pushy reporter:

Becky Gore: (Jessica Maples) Jessica Maples is a grandmotherly murder-mystery solver and writer, who randomly goes into her own imagination yet can still somehow solve murders. Rawr.

Allisen Casey: (Ivy Towers) She’s the selfish high-class wife of Mr. Towers who secretly wants him for his money.

Corydon Zouzias: (Professor Tommy Towers) “I’m rich. I discover King Rottenlux’s tomb, I’m married to a really young lady and it’s kind of creepy and I hate my wife. I have a lot of friends.”

Anna Birn: (Violet) An actress who thinks that she’s the best and everyone’s under her. She’s not stupid but she’s always trying to get something from everyone. All the bad stuff happens to her but that’s okay because she’s mean.

Jeremy Roffman: (Lyle Stark) He’s a girly matinee idol. He cheats on his wife with three other girls. He’s funny and he acts heroic but he’s really cowardly and flamboyant. He’s really fun to play.

Phelan Maguire: (Max) “I’m a rich Texan movie producer. I gamble and steal things to pay off the debts I have. I only really care about money. I’m unfaithful to my employees.”

Tobey Kane-Seitz: (Chef Lulu Fondue) “I hate everybody except Professor Tommy Towers because he employs me. I have a lot of pride. I always hit myself with my knife because it’s too big for me, but who needs limbs anyway?”

Morrigan Brady: (Violet) A rich snob who thinks she can get everything ‘cause she’s a drama queen.

Allie LaRocco: (Portia) She’s a maid and she had a cat but it died and she’s depressed. Her dad was an actor.

Cassie Traina: (Juliette) An orphan maid who was taken in by Professor Towers. She’s Ivy’s maid; she’s very optimistic; and she really wants to make something out of herself. She takes every opportunity to be in movies.

Hali Traina: (Portia) She’s a maid, one of the three sisters whose cat was killed and she’s hysterically sad over it. She feels that she has the potential to be in movies.

Catherine Parr: (Alexandra Periwinkle) She’s the secretary and she likes Professor Towers. She carries her clipboard everywhere. She’s frumpy, plain, and in her 30s. She has devoted her life to success.

Mary-Margaret Dwyer: (Nellie Fry) “I’m a reporter for the New York Bugle and I want to get the story on Professor Tower’s murder. I’m very pushy and I’ll do anything to get the story. I’m overall nice and young.”

Blaine Fitzgerald: (Lyle Stark) He’s a matinee idol who’s very full of himself. He has a secret marriage. He’s not who he seems in his movies. He’s scared. He’s thought to be a hero, but he’s actually shy.

Caroline Casparian: (Ivy Towers) Ivy is very snobby. She wants everything for herself. If she can’t have it, no one can. She would kill someone to get what she wants. She’s so melodramatic. Everything about her is times 10.

Samantha Phillips: (Sylvia) “I’m the stalker girlfriend. I’m mean, but I have a soft side for Chloe. I used to be with Peter, but he broke up with me and I’m heartbroken. Now I hate him and everyone else.”

Kyra Moskowitz: (Alexandra Periwinkle) “I’m Professor Tower’s secretary and I have a big crush on him. I’m nice for the most part. I think Ivy’s guilty of murder because I don’t like her. I have great hieroglyphics.”

Tanya Needlham: (Rose) She’s a Hollywood actress who likes to be pretty. She’s sassy in a way and wants to get attention. She’s nice; she’s not dumb. Her sister’s Violet.

Abigail Duncan: (Tarantella) She’s kind of this crazy, weird psychic lady who’s the personal adviser for Ivy Towers. She says she can read the future with her tarot cards and some of it’s true, but not everything. She’s weird and always so out-there and dramatic about everything. She has a sick husband and child and chickens, so she needs money.

Louis Weber: (Hercules Porkchop) He’s a flamboyant lady’s man who doesn’t know how to do it. He doesn’t have much skill as a detective. He’s more kooky than brain-smart. He’s very street smart.

Tess Foster (Jessica Maples) She’s very motherly and childish at the same time and very into her work, modest but in a way also proud. She’s very determined and she’s very clever.

Sarah Andersen: (Cordelia) She’s one of the maid sisters and she’s very hormonal — angry, crying or screaming but she can compose herself at times.

Jocelyn Lane: (Chloe) She’s not the smartest person. She’s very clingy because she feels like if she doesn’t hold on to her boyfriend, Peter, he’ll leave her. She and Sylvia hate each other. She’s very protective.

Theodore Henderson: (Inspector) “I am an Egyptian police agent assigned to investigate Professor Tower’s case. I’m pretty dumb, I have a tendency to interrupt Jessica and Hercules’ affair at crucial moments. I’m bad at my job.”

Corbett Francis: (Mummy) “I’m wrapped in bandages. I was discovered by Max. I steal Ivy and I walk really slowly. I walk into the desert.”

Nicolas Sterling: (Lloyd Crane) “I am a news reporter who is trying to get the scoop on Professor Tower’s murder. I’m kind of sneaky and I have a surprise romance. I turn out nice. I’m very desperate.”

Dante Nastasi: (Inspector) He’s a positive person who wants to get the job done. He’s very optimist about the whole thing. He’s a policeman who’s trying to solve the murder. He only wants to listen to an idea if there are facts behind it.

Eric Rizzi (Peter) Really stubborn rich guy that only wants money and uses people for it. He doesn’t care about anyone’s feelings, just money. He plays his girlfriend into saying he’ll share the money. He’s in a secret affair.

Nolan Shea: (Max) He’s a big shot Hollywood director who is very rich. He doesn’t care about anyone but himself. He makes fun of everyone and puts them down to make himself feel good.

Mae MacGrath: (Nellie Fry) She’s a reporter who has a secret marriage that is on bad terms at the moment. She wants to get out and do her job although people are restricting her from it. She’s determined. She isn’t known very well by the other characters.

Alison Rooney contributed to this article.