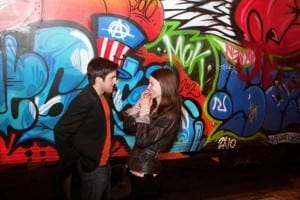 Special programs and discounts abound for: Love’s Labour’s Lost, Romeo and Juliet and The 39 Steps

At Christmas I no more desire a rose

Than wish a snow in May’s new-fangled mirth;

But like of each thing that in season grows.

Continuing and expanding upon special programs introduced over recent seasons to enhance the theater-going experience, the “Happenings at the Festival,” special savings discounts and subscription series pricing now, put together, fill up a page of the 2012 brochure, dangling enticements both drinkable and fiscal, to local ticket-buyers.  For specific dates on all of the programs described here, visit the HVSF calendar.  hvshakespeare.org/content/2012-calendar 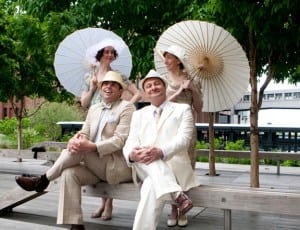 As always, special County and Neighborhood Nights allow four people per household to attend on specially designated nights for a 25 percent discount; Putnam, Dutchess, Rockland, Westchester, and Orange, along with West Point residents, are included.  These nights take place early in the season — in fact the season opens with a Putnam/Dutchess performance of 39 Steps on June 12 — and are intended to generate the word of mouth which then attracts others, for according to HVSF Managing Director Abigail Adams, “we’ve found that after people come once, they’re hooked. ”  The county nights are also considered, says Adams, “a thank you to our community for supporting us and being so embracing.”

School-age local residents are invited to the Haldane/Garrison night at Romeo and Juliet on June 17 at a much-reduced ticket cost of $18 for students, $22 for adults. Tickets should be purchased through the box office.

Content for many of the programs is devised by HSVF Founding Artistic ​Director Terry O’Brien and Associate Artistic Director/Education Director Chris Edwards, along with Adams, to further the company’s goal of “forging a partnership with our audience, our community.  We look to interactive events to reflect our style: fresh, alive and freewheeling,” says Adams.

Special events include the frequent Friday night pre-show wine tasting parties, which are “very social,” according to Adams.  Themed tastings this year include vintages from the Verona region to tie in with Romeo and Juliet.

Sundays (most) bring Caught in The Act, in which actors join with the audience after the show and discuss how the production was launched, providing backstage anecdotes.  With many actors returning season after season and thus very familiar to the audience, an opportunity is always provided for people to ask a question of their favorite.  Usually at least half the audience stays for the talkback.

Social media, in the form of the Festival’s Facebook and Twitter pages leads the way on another initiative designed to draw younger audiences to Shakespeare.  Funded by a $20,000 grant from the National Endowment for the Arts, a series of events, largely publicized online, has been designed around the performances, with the goal of  “exploring the reasons why we attend theater and what is gained from the experiences.” 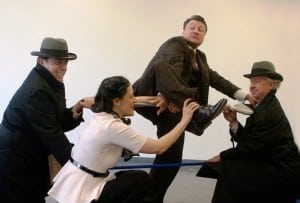 Younger-still audience members are the targets of the three Tuesday Family Nights, which feature a pre-show interactive workshop with festival actors built around a theme from each show.  As an example, at last year’s Around The World in 80 Days workshop, participants, in a harbinger of what was about to occur on stage, were asked to improvise a variety of different characters, using just one prop, in different ways.  Children must be at least five years old to participate, and, in fact to attend any of the performances. The discounted cost is $90 for a family of four.

Other discount bundles, all offering 25 percent off, include a three-play Preview Bargain Package; a Weeknight Package, attending all three plays on any Tuesday, Wednesday or Thursday from June 12 to July 8; and, new this year (as are the Monday performances themselves), a Monday Night Package, offered solely in August.

The season is framed by two lawn parties, fundraisers to which the community is invited.  The first takes place once the third production has opened; June 30 this year.  A closing party takes place after the last Saturday night performance, Sept. 1.  Both parties take place on the Boscobel lawn and feature food, wine, and live music.  A separate benefit, also at Boscobel, is to take place on June 9 (this Saturday), and Adams calls it “…a blast.  Actors do scenes from the season, there is a live auction, HVSF-style with the actors reading the description of the items, and ‘Lord Capulet’ is the host.”  This year’s party will be Italian-​themed.  Tickets, which were still available as of this writing, can be purchased through the HVSF website.

Again this year, theatergoers will be able to purchase catered picnic meals from Cold Spring’s Main Course, and the all-new menu has been expanded for 2012 (the HVSF website has details.)  New this season, patrons can avoid the concession stand intermission lines by pre-ordering (upon arrival) and pre-paying, and the drinks or meals will be waiting, with no delay, at intermission.

Also back again is the “In Process” adjunct season, where festival actors perform at the Depot Theatre on their days off, in events ranging from an evening of Theater Sports to a ten-minute play festival, and an encore of actor Jason O’Connell’s one-man show The Dork Night.  The Depot website, philipstowndepottheatre.org, will have full details when all is confirmed.

For more information on all of these special events and pricing, along with full descriptions of the shows themselves, visit HVSF or phone the box office at 845-265-9575.