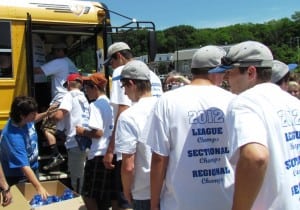 Next bus stop: the final four tournament in Johnson City

For the first time since 2001, Haldane’s baseball Blue Devils will play for the state championship. The New York State Class C champion will be determined in a four-team, one-game knock out tournament on Saturday, June 9 in Johnson City, just northwest of Binghamton. The Blue Devils earned their shot at the championship on Wednesday, defeating Pierson High School of Sag Harbor, Long Island 3-0. Ryan Koval turned in an outstanding performance both on the mound and at the plate, pitching a complete-game shutout and driving in two of the team’s three runs.  “It was the best performance I’ve seen from one of our guys in quite a while,” said head coach Tom Virgadamo. 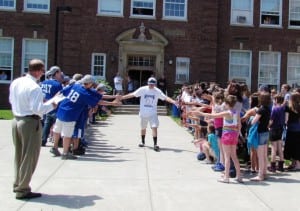 Each player receives a rousing greeting as they were introduced

Commenting on the Blue Devil’s chances on Saturday, Virgadamo said, “We have to stay within ourselves and keep doing what got us here.” Senior Dan Kinnaird, a right hander, will start for Haldane in their 10 a.m. game against Voorheesville. If they win, the Blue Devils will play for the championship at 4 p.m. against the winner of the Frewsburg-Lansing game.  All games will be played at Johnson City High School’s Wildcat Field. 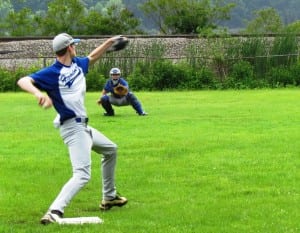 The team left Cold Spring at noon on Friday after a rousing sendoff at the Haldane campus. The entire school was out in force, cheering enthusiastically as each player was introduced.  Both Virgadamo and Kinnaird addressed the crowd. After final hugs, handshakes and pats on the back from family, friends, teachers and fans, the Blue Devils boarded the bus for the 160-mile drive west to Johnson City.

The other three teams in the tournament are from across the state. Voorheesville is located just west of Albany. Lansing is in the Finger Lakes north of Ithaca and Frewsburg is located near the western boundary of New York, close to the Pennsylvania border.
Photos: M.Turton