Scenic Hudson officials met with all nine members of the Putnam County Legislature during the Economic Development and Energy Committee meeting in Carmel on June 25 to provide the county government with an overview of the proposed Hudson River Fjord Hike/Bike Trail as well as to identify a role the county could play in the process.

Steve Rosenberg, senior vice president and planner Mark Wildonger told the legislators the Putnam County portion of the Hudson Fjord Hike/Bike Trail is planned to begin at the Cold Spring train station, make its way up Main Street along sidewalks and by way of sharrows (stenciled outlines on the asphalt indicating a shared roadway) and along Fair Street to Route 9D. A multi-use path would begin at the end of Fair Street and continue to the Breakneck train stop, just south of the border of Dutchess County. The scope of the project would include trail construction, formalizing two parking lots (one across from Little Stony Point and the other just past the Breakneck tunnel), creating better and safer trailway connections, improving signage and developing sidewalks and sharrows in the village.

Rosenberg said that the idea of this newest initiative was to “transform the route along 9D that goes from Cold Spring to Beacon from what is currently more of a speedway on which people sort of risk their lives to access the state parks and the Hudson River, and turn it into a parkway that is more conducive to those kinds of activities and can bolster the local economies.” 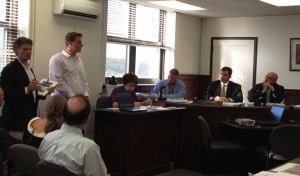 Wildonger outlined the project and its history (which began with a feasibility study initiated by the Hudson Highlands Greenway in 2007) and offered a regional context for the trail. He explained that the trail would be one part of a larger trail system that would eventually connect to the Beacon Loop trail (that runs along the Beacon waterfront to the Fishkill Creek and Main Street) and to the Trail of Two Cities, which links Newburgh and Beacon. Wildonger said that the Fjord Trail would also fit into the larger frame of established rail trails at the eastern end of Putnam County.

The Breakneck Ridge hiking trail was voted the number one trail in the United States by Trails.com (based on its popularity and usage) and was rated one of the top 10 trails in the country by Newsweek magazine. Wildonger noted “natural resources are a part of the economy of the Hudson Valley,” and he identified economic, recreational and safety benefits of establishing this mixed-use trail. “By creating this trail network we can create a safer, tourism-oriented corridor, boost local businesses, create improved access for the Hudson Highlands State Park as well as offer alternate forms of transportation throughout the corridor,” he said.​​ 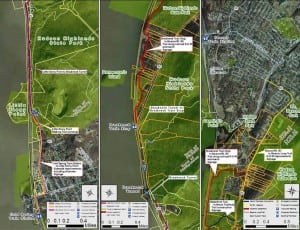 Daniel Birmingham, chair of the Economic Development and Energy Committee, thanked Scenic Hudson for their work in Putnam County over the years and noted the long history of “great partnerships” between them and the county, at one point culminating in two Preserve America Grants. He also asked about costs, as well as the proportion of consolidated funding ​the county would be responsible for. Mike McKee, chair of Greenway, answered that an estimated cost for one multi-use path, 10 feet wide, beginning at Little Stony Point and ending just beyond the Breakneck Tunnel, was approximately $2.8 million. Wildonger said that [the consolidated funding] is a 50-50 match, but by utilizing staff labor and materials “there are ways to get to the 50-50 match without allocating taxpayer dollars.”

Legislator Anthony DiCarlo acknowledged the importance of the recreation and safety rewards of the trail and pointed out that “the piece of bike trail that goes up Main Street in Cold Spring means a lot to the small business along that path. What that means to us here in the county is that we’ll have more people on Main Street, which means more sales tax dollars for us and more jobs and more economic development opportunities for us in the future. It’s really important for the small, micro-industry that exists there.”

DiCarlo asked if there was federal money available, and Wildonger replied that Scenic Hudson is working closely with U.S. Senator Charles Schumer’s Hudson Valley representative as well as the federal Department of Transportation (DOT), both of whom are actively engaged in the process of procuring funds and investigating if highway monies are available. The DOT also offered to review the feasibility study. Schumer signaled his enthusiastic support in a recent speech. 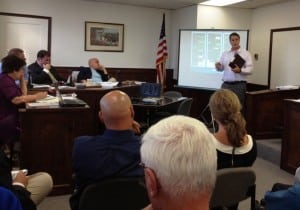 Putnam County Executive Mary Odell stated that “Libby Pataki has been working very closely with Scenic Hudson and will continue, as the director of tourism, to assist us in the mission and keep us in the loop about what funding mechanisms are available. The regional tourism incentive put into place by Governor Cuomo should help us as we promote this as a tourism attraction and economic recovery.”

The Fjord Trail project already has the support of the state DOT, Metro-North, the New York State Parks Commission and the Little Stony Point Society, as well as stakeholders in Putnam and Dutchess Counties including the Dutchess and Putnam County Executives, the mayor of Beacon, the mayor of Cold Spring and the supervisors of both Philipstown and Fishkill. “From our perspective that is a home run,” Rosenberg said.

Scenic Hudson’s immediate goal is to apply for grants during the current round of consolidated funding available in New York State. Wildonger and Rosenberg each stated that they hoped they could gain the approval and support of the county during the grant application process.

Birmingham answered, stating that “in order for us to give our full support we have to know what the grant is, and we need to have a firmer ​understanding of the fiscal responsibility that will fall on us.” The full ​legislature also has to approve any grant application made by a committee.

Consolidated grant applications are due on July 16, and it is unclear if county approval will come by then. “Please say that you were received warmly and positively by us,” Birmingham concluded.
Photos by C.Simek