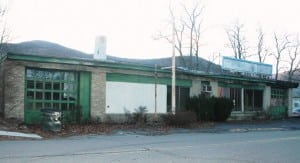 The saga of the derelict Impellittiere Motors garage moved toward closure last week, when the Cold Spring Justice Court set a new schedule for closing off defunct underground gasoline tanks and removal of old fuel barrels from the overgrown backyard.

After an hour of private conferences involving representatives of garage owner R.T. Impellittiere, New York State Department of Environmental Conservation (DEC) and Judge Thomas Costello, discussion at an open hearing June 27 determined the next stage of the case, listed on the docket as The People vs. Impellittiere.

Within 30 days of his court appearance, Impellittiere must get the tanks properly sealed and remove 55-gallon petroleum drums from the Fair Street property, with a follow-up court session slated for Aug. 2. Should he need more time, his attorney and the DEC must jointly request an extension from the judge.

In a formal complaint dated Nov. 14, 2011, the DEC alleged that the Impellittiere Motors gasoline tanks were “not closed permanently,” in violation of N.Y. State Codes, Rules and Regulations provisions governing storage of petroleum. Impellittiere had filed a written plea of “not guilty” in response to the DEC complaint; he made his first court appearance in February.

The garage-cum-auto dealership closed years ago, although exactly when is unclear. While the old service-station pumps above ground were taken out in late 2010, the actual gasoline storage tanks below ground remain in place — drawing DEC attention.

“It’s a serious matter that needs to be addressed,” Costello said. “I think the goal of everybody is to get the matter addressed.” He explained that holding a criminal court trial on the case might do little to get the gasoline tanks and fuel drums dealt with. But he also warned that Aug. 2 is a “control date” and that if the situation remains unresolved, the DEC can bring further charges.

One of two things should occur on Aug. 2, the judge said, summing up. “One, we’re done” with the case, “or, two, he has not done anything and we’re going to move ahead” with a full trial. “I don’t want there to be any confusion” on what must be accomplished, Costello informed Impellittiere.

“We’ve gone through an extensive conference,” Christopher Maher, Impellittiere’s attorney, noted in court. “We’ve set out goals or milestones in which my client is going to complete certain tasks.”

DEC Officer Keith Manners spoke of “multiple violations on the property. I was prepared to file more informations [charges] and felt the defendant wasn’t taking corrective actions,” he told the judge. “I made it very clear this time what he needed to do,” including check in with regional DEC officials to ensure nothing gets overlooked, Manners said.

Separately, over the last several months the Village of Cold Spring building inspector has raised allegations of numerous violations of village law at the site, 37 Fair St.