Seeking to express solidarity with towns elsewhere and prevent pollution at home, the Philipstown Town Board last Wednesday moved closer to banning hydraulic fracturing or “fracking” and its byproducts within the town.

In a workshop session, the board agreed to draft a suitable anti-fracking law, based on one adopted in May in Beacon. Action came six days after a board briefing on fracking –- a controversial method of extracting natural gas from subterranean rock formations, such as the Marcellus Shale belt found in southwestern New York State. Although Philipstown appears unsuitable for fracking, board members expressed concerns about the transportation or disposal of fracking wastes, including spreading of used fracking salt or brine on town roads.

Opponents describe fracking as a source of air and water pollution, decreased property values, threats to human health and livestock as well as farming and tourism, and costly burden on local infrastructures while providing insufficient local jobs, energy, or revenue to pay for the messes caused.

Town Board members seemed unanimous in their anti-fracking resolve.

“I agree. I’d like to see a total ban, so that we have nothing even around the edges,” Supervisor Richard Shea replied.

“Once your water is polluted, it’ll be forever,” Town Board Member Betty Budney added. 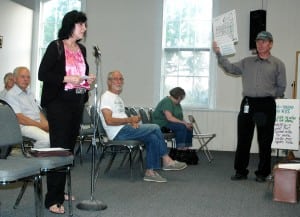 Paula Clair briefed the Town Board on fracking on July 12 and returned a week later to thank the board for moving forward on a fracking ban. (Photo by L.S. Armstrong)

The Beacon law prohibits exploration and drilling for natural gas and the transfer, storage, treatment, or disposal of natural gas exploration and production waste; it excludes existing natural gas operations covered byNew YorkState’s Oil, Gas, and Solution Mining Law and is not believed to affect homeowner use of propane or residential natural gas for heating.

Town Board members questioned whether the New York State Department of Transportation (DOT) could use fracking brine on state roads in the town.  “That would be one of our concerns here,” Board Member John Van Tassel said. He promised to contact DOT on the matter.

Shea noted that as a town government, under the municipal home rule laws, “you don’t have to accept things just because the state wants it.”

Merandy also noted that “we could be affected” if fracking pollution entered the New York City water supply, on which Cold Spring and Nelsonville rely in times of emergencies, such as when water levels in the village reservoirs drop drastically because of drought. “It’s something too vital to ignore,” he said.

Board Member Nancy Montgomery mentioned the importance of supporting other municipalities that have adopted an anti-fracking stance at a time when theNew York State government is trying to decide whether to allow fracking within the state.

Shea echoed her. “For me, the thing is a show of solidarity with other communities.” Overall, he concluded, “I think everybody’s on the same page here.”

Paula Clair, a fracking opponent who briefed the board on July 12, thanked the members for their support.

The board took up a request to work with the developer of Glassbury Courton Route 9 in the northern end of the town, to improve the intersection serving the housing project and town’s Quarry Pond park. “It’s not going to cast the town anything,” Shea said. “We’ll get a better pull-off lane for the park, a better pull off forHustis Road.”

Bill Balter, of Wilder Balter Partners Inc., the firm that developedGlassbury Court, said that that the intersection would be widened and improved through implementation of a previously designed but never effected plan. “It makes this safer. There will actually be real lanes” to assist drivers making turns, Balter said.

“So in other words, you’re going to have a turning lane going north on 9 and a turning late going south on 9,” Budney said.

The board appeared favorably inclined for Philipstown to be a co-applicant on the project (at no cost) but made no formal commitment, pending review of a few points. Balter said that if all goes well, the work could be completed by Nov. 1.

Shea said that he had conferred with a Central Hudson forester after resident objections to tree-cutting by Central Hudson Gas & Electric Corp. “They were essentially clear-cutting” -– removing all the trees in a swath of ground, he said.

Van Tassel suggested that “the problem is they didn’t cut it for years and years and now it’s overgrown” and so numerous trees get removed along utility lines.

The resulting look “is raw at first,” Shea noted. “People don’t want to see this clear-cut corridor but I think you’re going to see some of that. It’s a balance. And I did try to get across the point that the more greenery, the better off we’re all going to be.”

The board also heard a plea from Dave Vickery, of Horsemen’s Trail Farm, to either fix a drainage problem on town-owned property alongKnollwood Laneor let him acquire the parcel to deal with the drainage difficulties and farm the land. At present, runoff patterns worsened by last year’s violent storms and a crumbling retaining wall send water into his fields, bringing pollutants with it, Vickery said.

“The water pollution has changed dramatically. It’s killing trees. Now we have pastures that don’t grow and don’t drain. We’re not interested in going to any kind of argument” with the town, he said. “I’m just looking to get resolution,” in what could be “a win-win” for all parties involved.

Shea proposed that the town government “go in and do the work … and deal with our problem, because it is our problem. My feeling is that the town shouldn’t be sloughing off problems on residents.”

“It’s our problem,” Van Tassel concurred, adding that he doubted homeowners in theKnollwood Lanearea would want to see an expanded farm or other development so near.

Shea promised to “get this going” by asking Ron Gainer, the town’s consulting engineer, to devise a runoff-mitigation plan.