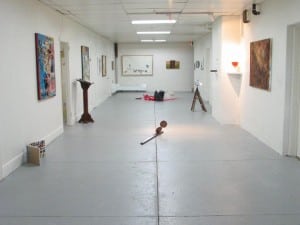 Faith in Art Gallery. Photo courtesy of the gallery.

The inaugural endeavor of the Faith in Art Gallery at the First Presbyterian Church in Beacon is a show titled Who Do You Say That I Am? featuring original artwork by local artists based on their study of the Gospel of Luke. The works are renderings of each artist’s engagement with the apogee of Luke’s story — that question followers have always asked about Jesus, the very question he turned around and posed to his own disciples.

Installing an art gallery in the cellar of a 175-year-old building was the brainchild of church elder Robert Paschal who, together with pastor Ben Larson-Wolbrink, decided to transform the musty, carpeted corridor of the church basement into a white-washed exhibition room after a major renovation this past spring. Home to the Beacon Music Factory, the classrooms that line the gallery’s perimeter hum with guitar and drum lessons all week long, marinating the gallery space in song and spiritedness and readying it to feature visual art exhibits on the weekends. The Faith in Art Gallery held its first opening as part of the June 9 Second Saturday event with plans to continue hosting new exhibits throughout the year.

A native of the Midwest, Larson-Wolbrink began his ministry in Beacon two years ago and was “delighted” by the abundance of creative activity happening in the community. He also wanted to be attentive to “the stories and the souls” of the parishioners who have lived in the area (and been a part of his congregation) for generations. New to the area, Larson-Wolbrink was aware of a mild disparity between the burgeoning artist community and folks who have, from the sidelines, watched their community transform in ways foreign to them. 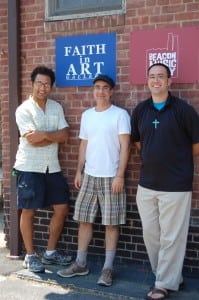 “This church has really deep roots in the industrial community of Matteawan (one of two villages that existed before the city of Beacon was incorporated in the early 1900s) and old segregations are still in the minds of the congregation. [Some members of the church] have remained ‘behind’ in the revival that Beacon has experienced these past years,” making community-building wearisome and leading to separation and distance. According to Larson-Wolbrink, the gallery is a way to close the gap between “new” and “old” Beacon — a gallery with the purpose of facilitating conversation at the very intersection of faith and the arts. The church provides a space and a point of convergence; the creative community provides the loam and the hoe.

“Both the arts and faith are grappling at what it means to be human, the mystery of life,” Larson-Wolbrink explains. Deeply inspired by Gregory Wolfe, the founder of Image: the Journal of Art, Faith and Mystery, and his idea that “religion and art have always shared the capacity to help us ​​renew our awareness of the ultimate questions: who we are, where we have come from, and where we are going,” Larson-Wolbrink used this ideology​ to anchor the project. The Gospel of Luke provided structure and a focus for the conversation, but ultimately each artist “was left to express deep things about him- or herself.”

Jean-Marc Superville Sovak, an artist and the administrative assistant for the church, was one of the first enthusiasts of the vision, and he talked to other artists and friends in town in order to get a measure of interest in engaging in a biblical text in the first place. The interest, he said, was immediate, and soon enough 17 artists had signed on to the project.

Each participant read the Gospel of Luke in its entirety and then, on two occasions, met with the group for a discussion and to ask questions. Larson-Wolbrink was present in order to provide a historical narrative to the text but left the artists on their own to live in whatever tension or comfort the reading may or may not have provoked, as well as to interpret how the question connected to them.

According to Beacon artist Peter Iannarelli, the format and focus of the Who Do You Say That I Am? project was exciting and very welcome to his own artistic process. “Inspiration … that’s how I used the text,” he said. “I wouldn’t call myself religious, but I am very spiritual, and I like religion. You just have to stay open-minded. I love the idea of these kind of shows. It’s what I love about Beacon.” 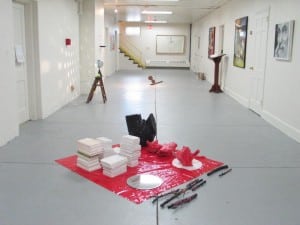 Faith in Art Gallery. Photo courtesy of the gallery.

Sovak says that “part of the process [for artists] was recognizing that, whether or not you take a completely secular point of view with regards to organized religion, I think there’s a recognition, an admission you have to make, in terms of the inheritance of a Judeo-Christian history / background that is part of art education at this time and in this culture. It’s easy to overlook when we think the history of art begins at Duchamp and goes from there.”

To be sure, the intersection of art and religion — a crossroads that has been imbued with misadventure and contention in recent decades — has historically shared the closest of associations. Certainly many of the most well-known pieces of visual art in the world — the stuff most folks think of when they think about “art” — are overtly religious. Think Michelangelo’s Sistine Chapel, or daVinci’s Last Supper. “Up until 100 years ago [the arts and religion] were intertwined,” Larson-Wolbrink says. “Then came the culture wars of the ’60s.” And, he says, separation.

It was important to the group that the conversation, and the project, be intentional. In this light, the Faith in Art Gallery seeks to provide space for serious art based on a serious conversation with faith. “We hope to explore a variety of texts and themes — engaging the ultimate questions — for future shows.” Sovak says. “And the payoff, hopefully, is that my congregation gets blessed by a deeper and broader understanding of their faith, and that people [the artists] who may not have ever had a ​​conversation of this faith have the opportunity to add voice to the conversation,” Larson-Wolbrink adds.

Larson-Wolbrink conceded that the project “pushed the envelope” for some members of his congregation, but he is very proud of its members for being brave enough to invite the conversation in the first place.

Larson-Wolbrink and his crew are already in conversations about their next project, possibly one focused on the Book of Genesis and a collaboration with Rabbi Brent Spodek and the Beacon Hebrew Alliance, but for the time being the current Who Do You Say That I Am? exhibit will remain open through the end of July at the Faith in Art Gallery, 50 Liberty St. in Beacon. The gallery is open on Saturdays and Sundays 1 – 5 p.m.