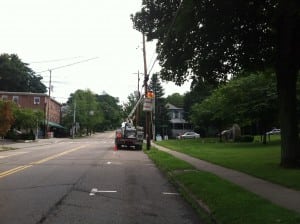 Philipstown appeared to escape the worst impact of the line of storms that swept across the Hudson Valley and upstate New York last evening. As of 9:00 a.m. this morning all main roads were open and there were no reports of significant damage. A few trees and many branches fell in the approximately 30-minute burst of strong winds and rain at about 6:30 p.m.

Power was lost in much of Philipstown for about six hours. Approximately 400 residents in North Highlands were still without power this morning.

Central Hudson released the following statement this morning on conditions locally and in the region.

Power was restored to nearly 19,000 customers last night and this morning in the wake of a destructive storm system that moved through the Mid-Hudson Valley yesterday, bringing strong winds, rain and lightning, and interrupting electric service to a total of more than 34,000 Central Hudson customers. The most heavily damaged areas were in central and southern Dutchess County, where more than 20,000 customers were affected. Portions of southern Ulster, Orange and Putnam counties were also impacted, where service was interrupted to approximately 5,000, 4,000 and 2,000 customers, respectively.

Utility crews worked overnight to clear roads and repair damage, and as of 6:30 a.m. this morning, the approximately 14,000 outages remain in:

Customers are reminded to call Central Hudson’s PowerLine at (845) 452-2700 or 1-800-527-2714 to report their power condition if they have not already done so, and are encouraged to use the automated reporting system. Customers with access to a computer may also report their power condition via CentralHudson.com by using the StormCentral function. Information regarding service restoration estimates, as it becomes available, can be obtained by phone and on-line, and updates are posted on Facebook and Twitter. A mobile version of the utility’s website, including StormCentral, can be accessed by web-enabled cell phones and mobile devices at CentralHudson.com. Free Central Hudson mobile applications for Android, Apple and Blackberry devices are also available by logging onto CentralHudson.com/mobileapp.

Customers are advised to keep safety in mind during any storm emergency, including: