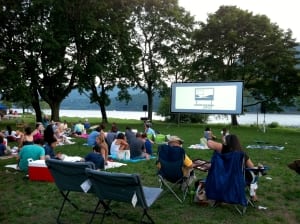 Last Sunday’s showing of Chinatown drew a surprising number of out of town visitors. Courtesy of Cold Spring Film Society.

At its halfway point, the Cold Spring Film Society’s (CSFS) 2012 season is already a success. Goonies, Casablanca and Butch Cassidy and the Sundance Kid, the first three offerings in its Saturday evening Summer Film Series at Dockside Park, averaged 370 viewers.

Last Saturday’s (Aug. 4) showing of Chinatown had a smaller turnout of 284 moviegoers — no doubt due in part to the extreme heat and humidity. Despite the smaller crowd, a survey conducted by CSFS volunteers that night yielded results that should make Cold Spring business owners and leaders sit up and take notice.

The statistic that should please local restaurant owners most: 50 percent of all survey respondents, whether local or from out of town, had dinner in a Cold Spring restaurant that evening before the movie. While not part of the survey, it is not a giant leap to assume that at least some moviegoers also patronized local establishments after the film. 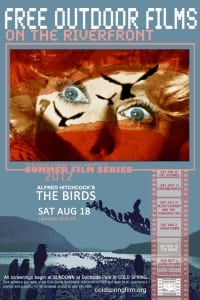 This was the first survey conducted by CSFS. “Last year we were surprised [by] a couple who had come to Cold Spring on a day trip, and then chose to stay overnight so they could stay for North by Northwest,” CSFS co-founding member Stephanie Hawkins said. “Since then, we’ve wondered how large the resident audience is, and how large the visiting audience is.”

Hawkins said they were also curious about how many moviegoers also visited local restaurants and cafes and that the data from this initial survey indicates that “every restaurant, café and dessert shop was patronized.” She also said that for 64 percent of survey respondents, it was their first time at the Summer Film Series. “That’s huge for us.”

Organizers also learned that the posters used to promote the film series have been very effective. Designed by Jen Zwarich, they have a professional, eye-catching look. The current edition advertising the Aug. 18 showing of Alfred Hitchcock’s The Birds is especially creative. It features an image of Dockside Park with Storm King looming in the background, and the entire area is besieged by crows.

12 percent of respondents from out-of-town traveled to Cold Spring ​​by train.

​44 percent of out-of-town respondents said that the movie was a factor in their plans to visit Cold Spring.

38 percent of respondents from Philipstown indicated that they walked to the movie.

The survey also incorporated open-ended questions, such as simply asking attendees what they like about the film series. Hawkins said that repeated responses included “a sense of togetherness” and “a gathering place.” People also said they appreciate the natural setting, the river, the view, the outdoors — and the fact that the movies are free.

While Hawkins is pleased with the survey results she is also cautious not to jump to too many conclusions. “Though it’s not entirely representative of the previous films this summer, our survey at Chinatown gives us some numbers to describe the impact [of] the series,” she said. “[It] confirmed ideas we already had about the Summer Film Series: it’s both good for community and good for businesses in the village.”

CSFS member Dave McCarthy agreed, concluding that “It’s clear that the arts can drive business into the village, and that’s a great thing! If the business community wants to try and increase business in town, then supporting things like the Cold Spring Film Society is a winning strategy.”

Hawkins gave a tip of the hat to Anne Impellizzeri, Marie Early, Judith Kepner Rose, Julia Famularo, Michelle Smith, Janet McCue, Kathleen Foley, and Matt Francisco who worked their way through the crowd at Chinatown to conduct the survey. A second survey will take place at the Sept. 2 double feature of The Iron Giant and Ghostbusters.

Anyone who wants to get involved with CSFS can email the organization at [email protected] Movie buffs can also check out their website at coldspringfilm.org or like the organization on Facebook.