It’s a sure sign that the seasons will soon be in transition. The Summer Sunset Music Series will play its final notes for 2012 on Sunday, Sept. 2 at 5:30 at Cold Spring’s bandstand. 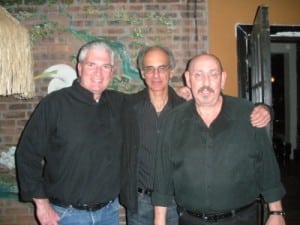 Buddy Traina, right, and his band will perform the last concert of the Summer Sunset Music Series at Cold Spring's bandstand on Sunday, Sept. 2.

The Buddy Traina Band will perform a makeup show for a concert washed out by bad weather earlier this summer. It’s a fitting finale, since Traina coordinates the popular riverfront concerts.

Traina has been performing for 45 years, and his band brings an eclectic blend of rock ’n’ roll, folk, jazz and pop to the stage. He handles vocals and guitar with Mario Trombetta on drums, Bill Donovan on bass, and Randy Sanna on keyboards.

“This year’s series has been a great success,” Traina said. “It’s our 12th year.” He said that the Sunday evening shows offer residents a chance to hear local talent as well as previously unknown but talented groups. The venue is definitely part of the magic of the series. ”It’s such a wonderful setting — right on the Hudson River,” Traina said.

The popularity of the series among regional musicians creates a challenge for Traina in scheduling shows each Sunday evening from early July through August. He’s been doing it for four years. “It’s a six-month job putting it together — and I get 60 to 70 applications from bands each season,” he said. “I’ve probably got 100 musicians mad at me — they all want to play here!” Despite the tough calls in choosing which bands make the cut, Traina wouldn’t have it any other way. “I like doing it,” he said.

Traina originally signed with Laurie Records and now owns his own label, Bone Records. He and his band cover classic old tunes as well as his own unique originals. Traina has played with the Shirelles, the Happenings, and Dion & the Belmonts.

The Summer Sunset Music Series is sponsored by the Cold Spring Area Chamber of Commerce. Traina, a member of the chamber’s board of directors, coordinates the series as a volunteer.