The Living Room’s vital signs have been strong in its first year. Opened as a hybrid host to classes, an event space and a retail shop, it has shaped and defined itself in response to the community and now, minus the storefront business, is establishing itself mainly as a venue for all sorts of events. Some of these events are produced by The Living Room’s owners, Nathalie Jonas and Phil Nobel, while many others are presented by people who have rented out the space for a special occasion or classes. 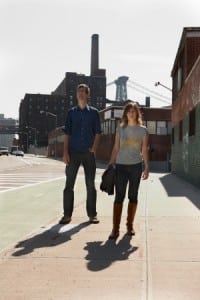 Little Silver will perform on Sept. 8. Photo by Peter Rad.

The Living Room made a splashy entrance with a jam-packed opening concert by the well-known indie group The National, and the opening act for that concert, Swear and Shake, is returning on Sept. 8 to headline, along with Little Silver, another Brooklyn-based band with Hudson Valley roots. This concert is house-produced, with Jonas seeking each band out, thinking they’d be great together. Nobel notes, “There’s a sweet spot for what audiences here are into, and we thought this would really appeal.”

Jonas adds: “On the one hand their music fits right into the folk/singer-songwriter scene here in Cold Spring. However, they also bring with them a bit of young, Brooklyn/city edge, which I think would appeal to a certain Cold Spring audience. Our hope for this show is to get a mix. The bands are doing their own promotion, and it’s so easy to get here from the city, so ideally people from all over will come to the concert.”

Little Silver has been dubbed by Magnet Magazine as “a perfect example of the new generation of folk, featuring twanging acoustic guitar punctuated by carefully conducted vocal harmonies, all dripping in … tranquility and longing. Indeed, Little Silver is quite reminiscent of Fleet Foxes or the Head and the Heart.”

David Malachowski of the Daily Freeman described Swear and Shake: “A haunting postcard from a faraway, warmer place, [lead singer Kari] Spieler’s moving, heartfelt delivery takes this to a higher place.” Their website bio describes their shows at such New York City venues as the Knitting Factory and The Bitter End as “raucous and full of laughter and dancing.”

Jonas says The Living Room continues to evolve: “We’ve made changes in the last couple of months; we’ve streamlined and the store is gone. The event space aspect has been taking off, and it became clear that it should be our focus.”

The 1,500-square-foot space has lent itself to a variety of uses, from wedding receptions to cocktail parties for local nonprofits, a film screening by a “local auteur” (name not revealed), as well as to the very popular dance parties where the crowds trailing out onto Main Street have, on occasion, given Cold Spring a taste of nightlife not usually experienced in these quiet streets. A small room off the back is available for rent separately and has been used for everything from massage therapy to guitar lessons. 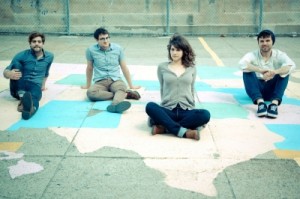 The entire space can be rented “raw” with the renters supplying anything along the lines of catering, flowers, photography, etc., themselves, or alternately Jonas and Nobel can coordinate the extras or steer the renters towards reputable local suppliers. Regular Zumba, Pilates and yoga classes also dot the calendar, and local and regional arts organizations such as Cold Spring Arts and Local 845 have made use of the large, open room as well, as have bands producing their own events.

Although there is no house sound system (they hope to put one in someday), the space has received, says Nobel, “great feedback on the acoustics.” No amplification is needed in the room for spoken voice, as the sound carries well. Bands bring in their own equipment. The dance parties — there have been several — have been packed events, with each one drawing a crowd different to the previous one, according to Nobel. He added that “half the people at the last incarnation were from the city — really, it’s just as easy to get here from Manhattan as it is to go from one end of the city to another for an event or party.”

Nobel and Jonas have lots of ideas for future use of the space: beer tastings, pop-up dinners, more showings of art works. Jonas says her goal is more collaboration with other venues. One such joint undertaking will happen on New Year’s Eve, where they promise “an extravaganza” in tandem with Cathryn’s Tuscan Grill next door, with an “eat and drink there, dance here” menu of festivities. An earlier collaboration happened last May with a Louie Miranda concert for kids accompanied by pizza supplied by Angelina’s.

Jonas and Nobel have lived in Cold Spring since 2009. They “found Cold Spring like everyone else — as day-trippers. We were tired of the city but still needed to be in the city a couple of times a week. This was the closest nice place,” says Jonas. Living in the apartment upstairs from The Living Room, with their backgrounds in architecture (Nobel) and modern dance and Feldenkrais movement teaching (Jonas), they were quick to spot the potential of the large empty storefront below and approached the landlord, who was very amenable to their ideas for it.

Tickets, for the Little Silver/Swear and Shake concert cost $10 and  can be purchased at [email protected] or by phoning 845-270-8210. Doors open at 7:30 p.m. The Living Room is located at 103 Main St. in Cold Spring. For more information visit coldspringlivingroom.com. To learn more about Little Silver, visit littlesilver.com.