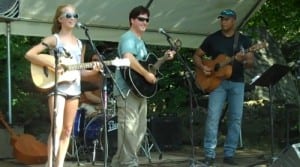 Garrison’s Fred Martin was attending his 18th Hoot on the Hudson (and there have been 18 of them), the annual outdoor music event held by the Little Stony Point Citizen’s Association. Martin was performing with some of his family on the stage near Little Stony Point this past Sunday, when, as things often happen at the Hoot, a little unplanned musical magic took place. In his words:

“Bernie Williams, of Yankees baseball fame, I learned later, is also a Grammy-nominated recording artist. After seeing a poster for the Hoot in the Foundry Cafe, he and friends touring on motorcycles stopped in to see what was going on. It wasn’t long before ‘Coach Mike’ [Gasparri] of the Taconic Outdoor Education Center recognized Bernie. My brother John Martin handed Bernie a guitar and the rest was magic.

“In the true spirit of hootenanny, Bernie joined right in onstage without even a rehearsal. Bernie played beautifully woven guitar lines, accompanying myself and my brother on several of my original tunes (one co-written by Pete Seeger, Peace Will Prevail). Bernie stayed onstage to accompany my daughter Kaelin in her song, Fix You, by Coldplay. It was really magical.

“Pete Seeger played later in the afternoon, devoting several rarely heard verses of Turn, Turn, Turn to his wife Toshi, who was also there. Pete explained that he wrote the verses in 1954, when they had young kids. Evoking the cares of young parents, he included ‘a time for the bus.’ It really was quite touching. Dar Williams came on after and led a whole stage full of folks in If I Had a Hammer.

“It was probably the best Hoot of all.”