More than year after Hurricane Irene and months of waiting, Philipstown Highway Superintendent Roger Chirico says he’s ready to finish the town’s massive road repair projects — whenever FEMA is. Reviewing a map of pending work, in a recent interview in his highway department office, Chirico expressed both his eagerness to get on with the job and his frustrations that funding from the Federal Emergency Management Agency ( FEMA) had yet to materialize for certain crucial projects. 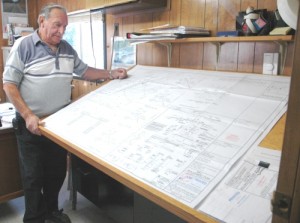 Roger Chirico reviews a map of a pending project. Photo by L.S. Armstrong

The town has received some aid, and on Sept. 6 the Philipstown Town Board approved bids for $512,685 in post-hurricane road work: $94,200 for the Indian Brook Road East bank stabilization and $397,376 for Frazier Road culvert replacement.

That still leaves too much on the agenda with too little money, Chirico told Philipstown.info on Sept. 10. He cited a project involving 45 feet of rebuilding in the area of Indian Brook Road and Moog Road, beyond Avery Road in Garrison. It entails insertion of steel pipes, pouring of concrete, reconfiguring the slope — as the storm wiped out the original — and other heavy reconstruction.

In terms of expenses, it’s over a FEMA major-project trigger level of $63,900, meaning that FEMA considers it a significant undertaking, worthy of assistance, Chirico explained. Whatever the final cost turns out to be, “even if it’s over what we estimated, they pay,” he said. At least, FEMA pays at some stage. The slowness so far “makes it difficult,” the highway superintendent said. “We’re putting these jobs to bid. We don’t have the money in the budget to pay for this” directly. Due to the various complications, “I doubt very much we’re going to get done this year” on Indian Brook-Moog Road and other projects, he said, his regret evident. 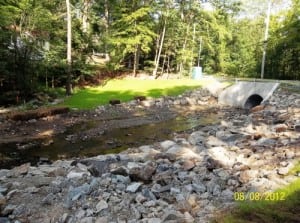 Nonetheless, on the brighter side, “we’ve got a lot completed, too,” with FEMA help, he said, pointing to one key example, the rebuilding of Winston Lane, in the southern end of Philipstown. “I was very pleased with the progress on it.” Although much of the construction could not be done “in-house,” town crews built a temporary road, he said. In a further demonstration of local cooperation, a nearby property-owner donated a strip of land for the temporary road, making the fix-up of the damaged road easier, Chirico said. FEMA pitched in too, with about $330,000 in funds, he added.

Even smaller projects can prove challenging, not only in terms of the actual work but in managing the finances, Chirico observed. “When you’ve really got to be on your toes is when the jobs are under $63,900.” For instance, he said, if the town anticipates a job will cost $30,000 and the ultimate price tag is $25,000, the town can typically keep the $5,000 “extra.” But if the town underestimates the expense, it can be forced to make up the difference. “If you don’t estimate it right, you can lose,” he said. “We haven’t lost yet.”