The unusual configuration of oboe, bassoon, piano, percussion and voice makes up the chamber group Madera Vox, which will perform at the Chapel Restoration on Saturday, Oct. 6 at 5:30 p.m. At its core there is a classical foundation, but what is launched from there takes off into uncharted territory. 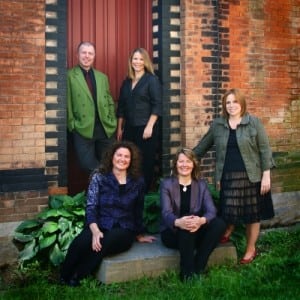 The group’s distinctive sound comes from unexpected and often playful combinations of instruments and voice, coupled with a calculated mix of of high-brow and low-brow musical styles. A major influence for Madera Vox has been the music of the mid-20th-century German-American composer Kurt Weill, who said, “I have never acknowledged the difference between ‘serious’ music and ‘light’ music. There is only good music and bad music.” A recent review went on to say that “Madera Vox knows the difference.”

All of the members of Madera Vox have a foundation of conservatory-level classical-music training. Over the years, current oboist Keve Wilson, bassoonist Cornelia McGiver and pianist Sylvia Buccelli have pursued classical performing careers. They have played Carnegie Hall, Weill Hall, Merkin Hall, New England Conservatory and many more. They can be heard on recordings from Albany, Parnassus, Narada and PBR Records, as well as on film soundtracks.

Soprano Kelly Ellenwood has distinguished Broadway credentials (La Carlotta, Phantom of the Opera), and percussionist David Gluck has toured internationally as a jazz and rock drummer and as a founding member of Rhythm and Brass, with whom he has multiple recordings.

Madera Vox, which is Beacon-based and formed in 2007, is a collaborative synthesis of each member’s contributions, which in turn challenges each player’s versatility. The resulting musical alchemy aims to be accessible, engaging, playful, and insightful — unusual instruments, unusual music, an unusual combination of players.

The indie-classical ensemble has performed extensively in the Northeast region and was invited to perform at the 2011 International Double Reed Society conference in Tempe, Ariz. College residencies, private house concerts and full-scale public concerts are among the performance offerings for the ensemble. “Our music spans generations as well as genres,” says Ellenwood, the “vox” of the group (and resident of Beacon). “Our repertoire has something for everyone, from Kurt Weill to Kurt Cobain.”

Madera Vox released their debut self-titled CD in Sept. 2009. A sophomore recording is in the works now, as is a holiday album. They are also currently working on an exciting music-video project with filmmaker Sam Whedon, with the plan to incorporate the result into their live concerts, adding a multimedia aspect to their performances.

Madera Vox will also be performing on Oct. 14 at the Newburgh Chamber Music Series. The ticket cost is $20 per person. Parking for the Chapel Restoration concert is free and available at the adjacent Metro-North station Cold Spring parking lot.

Visit ChapelRestoration.org and MaderaVox.org for more details and to listen to audio clips.