‘They need to feel safe, loved and special’

Although there are several nursery schools and day care centers serving the children of Cold Spring Village and Garrison, there was nothing outside of the village boundaries until Serendipity Child Care and Learning Center opened its doors in 1998. Built for expressly the purpose it still serves, the cheery facility is located on Lady Blue Devils Lane, at the end of the cul-de-sac off Route 9. 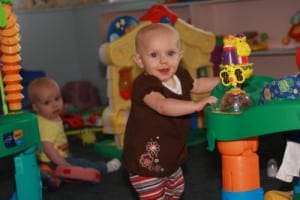 Ashley and Gavin having fun at daycare. Photo by Maggie Benmour

With space for 37 children, ages 6 weeks to 5 years old, the facility attracts families not only from those parts of Cold Spring lining Route 9, but also further up and down the Route 9 corridor, from Wappingers to Peekskill, Beacon as well, with many finding the location convenient to a point along their commutes.

Serendipity’s four cheery classrooms are divided into a nursery, two toddler rooms and a pre-school. As a full-day program, the hours are from 7 a.m. to 7 p.m., Monday to Friday, year-round, except for major holidays. Serendipity’s owner, Jenny Gilleo, began working there in 1999, first as a “floater” going from room to room as needed, and then as a head teacher.

With the retirement of the founder in 2009, Gilleo, who had by then graduated from college, took over the business. Along with Jenny there is a 10-person staff, with two to a room. Although the staff doesn’t rotate between rooms, they do get to know all of the children and not just those they are caring for. The staff is full of long-timers, some who have been there seven to 14 years, and most with over four years’ experience there. Philipstown staff members include Joyce Constantino, Holly Giachinta, Diane Junjulas and Maris Brennan, a more recent Haldane graduate.

Gilleo tries to adapt her program to every child’s individual needs within a warm, home-like environment. Serendipity’s mission statement says in part: “The primary goal is to provide children with a strong foundation and love of learning. … The lesson plans are created to immerse children in learning through play, individual and group interactions.”

For infants, Gilleo likes to provide a long transition period in which parents can observe for as long as they need to. “We want new moms to watch and get a feel for the room. This helps us to work with their baby, because we try to mimic what the parents are doing at home. We’re a co-team and we work through it together,” she says.

The older children’s rooms each have an age-appropriate goal list of social, emotional, physical and intellectual touch points. These range from “developing a positive sense of self” to “demonstrate the ability to share and take turns,” “ask and answer questions about the content of books,” to “group common objects, based on specific criteria.” 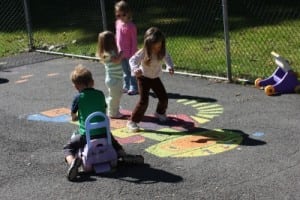 Children playing hopscotch on one of the permanent stencils in Serendipity’s playground. Photo by Maggie Benmour

A typical schedule in the pre-K room includes free play after arrival, then settle time activities, which could be tabletop or gross motor. Children then move to active learning centers, have circle time with special helper duties and small group projects. Lunch (cooked by staff, and they try to include lots of fruits an veggies) is followed by a nap or quiet time for the non-nappers and another round of centers. Outside play is a big component as well.

While Serendipity’s location prevents walking trips around the area, the extensive “backyard” holds lots of equipment as well as open spaces. There are bikes with helmets for the “big kids” to ride, as well as hula hoops and a parachute for all. The backyard hosts many picnics as well, some of which are supplied with items from Serendipity’s large garden, a big part of their summer program, which has yielded lots of peppers, cucumbers and tomatoes.

Many activities are based upon monthly themes. The toddler room’s October theme is pumpkins, and the children will make art pumpkins, decorate real pumpkins, learn about the color orange and the letter P, make pumpkin pancakes, and get to see what’s inside of a pumpkin.

Pre-school curriculum themes include the five senses, recycling, rainbows, and Father’s Day, which is a big deal at Serendipity as the kids come up with activities for the dads to do, such as an eating contest that sees the dads on their knees, hands behind their backs, gobbling down concoctions made from jello, gummy bears and the like. Relay races and the tossing of water balloons add to the fun. The end of the school year sees a huge graduation party, complete with caps and gowns. 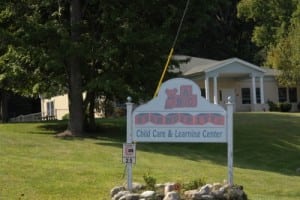 The curriculum is enhanced by a yoga program taught by the Children’s School of Yoga, and by visits from ComputerTots. The toddler and pre-K rooms also “read” Scholastic’s “Let’s Find Out” and “Weekly Readers” regularly. Serendipity hosts visits from the fire department and sheriff’s office, which talks about bicycle safety. Gilleo also puts a lot of effort into complying with new initiatives, such as NAP SACC, a nutrition and physical activities program developed by the University of North Carolina, which asks child care providers to serve as role models by eating healthy and showing children that physical activity can be fun. Serendipity is also medically certified to administer medications.

Toilet training is done with a spirit of teamwork, for, as Gileo notes, “They tend to pick it up faster if a friend is doing it.” Each spring, as they do at many local nursery schools, kindergarten staff from Haldane visit and meet with staff and children to assess the next year’s entering class.

Communication is important to Gilleo, and children go home with a daily sheet including a “This week I tried my best to” chart of yes/no/sometimes check marks for categories like “interact with my peers.” This is accompanied, depending on the room, with a rundown of what the child ate that day, potty times, and a Mood/My Day breakdown with categories including “Something is bothering me” and “Very active.”

Serendipity currently has some openings, as increased unemployment and under-employment has taken its toll. “This is an expense people cut back on,” says Gilleo, but she adds that they have a lot of children from homes where parents work from home — something they have seen increase recently. Children may attend for any number of days per week. For more details or to tour the facility, call Jenny Gilleo at 845-265-3539.