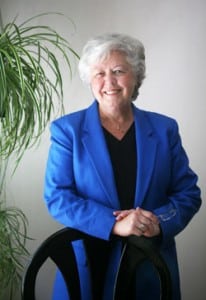 Sandy Galef, a veteran of 20 years representing the Hudson Valley (10 of them including Philipstown) in the New York State Assembly isn’t about to call it quits. She is energetically campaigning for reelection, asking voters in the newly drawn but not radically changed 95th District to look at her record and what she stands for and recognize that having her in the Democratic majority is good for the area and the state as a whole.

In a recent visit to The Paper at 69 Main St. in Cold Spring, Galef outlined a variety of her stands on issues she said made the case for returning her to office.

Addressing the state’s overall economic landscape in the aftermath of the national fiscal crisis, Galef said: “I think in the last two years under the leadership of Gov. Cuomo New York state has really turned our economic picture around. First we dealt with the $14 billion deficit without using fiscal gimmicks. And we were able to stay within in our own 2 percent cap.”

Continuing she pointed to a lower state income tax rate “for the first time in 58 years,” and eliminating the 4 percent state sales tax on clothing and shoes as further indications of a commitment to fiscal discipline and economic development.

Galef also mentioned the consolidation of several state agencies (such as the Insurance and Banking Departments) as furthering cost savings, moves she enthusiastically supports.

Consolidation is a theme Galef returned to throughout her discussion of issues both statewide and more pointedly, locally.

“No question the property tax is the biggest issue in my office. It’s top of everyone’s mind,” she said. Galef chairs the Assembly Real Property Committee. She extolled the impact of the state’s 2 percent tax cap levy for both municipalities and school districts, citing that 95 percent of the school districts had not sought to exceed their cap formulas. “I believe it has forced local government and school districts [and state government] to make tough choices they wouldn’t otherwise make,” she said.

Galef said she thought schools and local governments had to think and work harder to find ways to reduce costs, including looking at every line item, especially health benefits. “I think the cap has helped with negotiations with employees,” she said.

Galef was quick to add that she believed strongly the state government had to provide mandate relief to localities to contribute to easing the pressure on taxes. She pointed to recent reforms in the state pension system, which includes most local governments and public school employees, which will not have immediate impact but should in the long run with benefits reduced for newer civil servants. She noted that the state constitution prohibited any reductions in existing pension obligations.

She also touted the legislation authorizing the state’s assumption of the administration of Medicaid from the county as another example of the legislature’s and her commitment to reducing local costs. She said she hoped ultimately the state would take over all county Medicaid obligations with the state cost attributed to the income tax and not local property taxes. “Clearly we have to do even more on mandates,” she said.

On schools specifically Galef said she thought there would have to be more combining of state school districts over time as a response to budget strains. She suggested a gubernatorial task force might ultimately recommend to the legislature consolidation for districts below a minimum of students. She also said school districts might someday be able to use a blend of property and income taxes to fund education using state-collected data for the districts. “It would help seniors with low income and high property taxes for instance.”

Getting schools such as Garrison and Haldane that cross district lines to share more resources and services if they are unable to bring themselves to actually pursue consolidation is also on Galef’s agenda.

For perhaps more immediate savings, Galef said the legislature should pass her bill, which would allow for regional negotiation of teacher contracts. “You could have Garrison and Haldane and maybe Putnam Valley all negotiate a contract. When each district negotiates their own, they are negotiating against the other districts in the area.” She acknowledged that such a change would have to be gradually introduced perhaps only for new teachers.

Despite budget limitations Galef supported the governor’s New York Works program, which provided $1.6 billion for road and bridge repair and $89 million for upgrades to state parks. “This creates jobs and real public benefit at the same time. Our infrastructure is old and needs a lot of work,” she said.  “I am very pleased the state did a lot of work on Route 9,” she said as an example of the program’s local value.

Although it has had big operational cutbacks, Galef said the State Department of Transportation was “getting smarter” about how it operated. She said meeting regularly with officials there has long been one of her priorities. Based in Ossining while also representing Peekskill, Cortlandt, Philipstown and Kent, Galef said attending many local events and meetings keeps her on local roads quite a bit, so she conducts personal inspections.

Both the Sierra Club and the League of Conservation Voters have endorsed Galef for reelection, which she points out when asked about her record and thoughts on the environment and energy needs.

Galef said she had expectations that developments in solar energy manufacturing would continue to give both businesses and residents new options for their energy sources. She said a current New York program allows for tax credits in return for solar installations.

Hydrofracking, while not directly impacting the Hudson Valley, is nevertheless much on Galef’s mind.  “It is the most complicated and challenging environmental issue facing the state.” She journeyed to Pennsylvania to see firsthand and with her staff made a documentary about the experience, which gave her much pause as to the viability of current techniques for gas extraction. She has voted twice for a moratorium on granting licenses.

“New York State has a great water system, and we don’t want to compromise it. We need to know more about the chemicals used and what to do with the water that comes up after the process. Do we declare it hazardous waste and act accordingly?”

Galef readily acknowledged Albany continues to need reform measures to instill greater confidence in the state government among citizens.  In particular she supports campaign finance reform that would involve partial public financing of campaigns to limit the influence of organized private money. She said she thought the New York City system, with candidates receiving matching funds once they raised a certain amount publicly, was working.

She also sees legislation already moving through the legislature to create an independent redistricting process before the next census as a key to fair elections and better access to government for all.