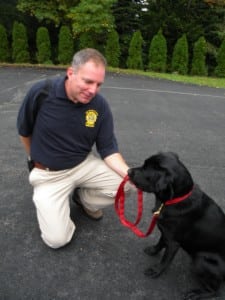 Firefighter John Scrocca (husband of Haldane second-grade teacher Catherine Scrocca) and Detective John V. Peters (whose son John is in Beth Satterlee’s second-grade class) and his arson dog Daisy came to Haldane to speak to the second-grade classes about fire safety and community helpers during fire-safety week. John Scrocca reminded the children about what to do in case of a fire.

When asked what to do if they wake up in a smoke-filled room, the students announced, “Stop, drop and roll.” He showed the children his gear and explained its uses. At the end of the fire-safety portion of the program, a child asked why the dog was there, and that was a perfect segue to the arson-dog information.

Arson dogs take over after a fire is put out. Nineteen-month-old black lab Daisy and Detective Peters are the newest members of the Westchester County Police, Special Operations Division Canine Unit. Daisy is a certified Accelerant Detection Canine (ADC) who has been trained to sniff out various substances used to start fires. Daisy and Peters were trained during a 200-hour course at Maine Specialty Dogs.

Daisy was trained to work around physical obstacles to find accelerants. She demonstrated her skills for the children on the playground when Peters hid a cloth of gasoline on the playground and at several children’s feet. Daisy followed the scent and sat when she sniffed it, after which she received a treat reward for completing a successful exercise.

Katie Moeller’s third grade class visited Glynwood Farm in order to further their study of plants. Students were able to go into the garden to pick fresh ingredients, including basil, chives, garlic, peppers, leeks and cabbage. The main ingredient was kale, which they had picked from Haldane’s school garden. The students also visited the chickens in order to gather fresh eggs, and then met the chef. All students participated in preparing the ingredients required for their recipe. In the end, the students enjoyed kale soup and fresh omelets made with peppers, garlic and leeks.