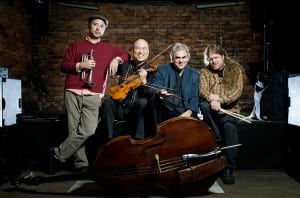 Karl Ackerman of All About Jazz called EDGE “a stellar line-up of free jazz veterans.” He added, “The notion that the next great force in new jazz could be a violinist may seem a bit incongruous, but Crossroads Unseen is fresh, exciting and creative, and one of the best recordings of the year.”

Chapel board members Gwen Laster and James Keepnews both play in Hwang’s 40-piece improvising string orchestra, Spontaneous River — in fact, it’s where the two met, although they both lived in Cold Spring at the time.

Admission to the event is $15, or $10 for seniors and students. The Chapel Restoration is located at 45 Market St. in Cold Spring.