On Thursday, Nov. 1, supporters and friends of BeaconArts gathered in the Waterfall Room at The Roundhouse to celebrate that organization’s 10th anniversary and to honor three individuals, prominent in the community for their roles in invigorating and enhancing the city and making arts and new recreation facilities accessible to all residents as well as to those living nearby. 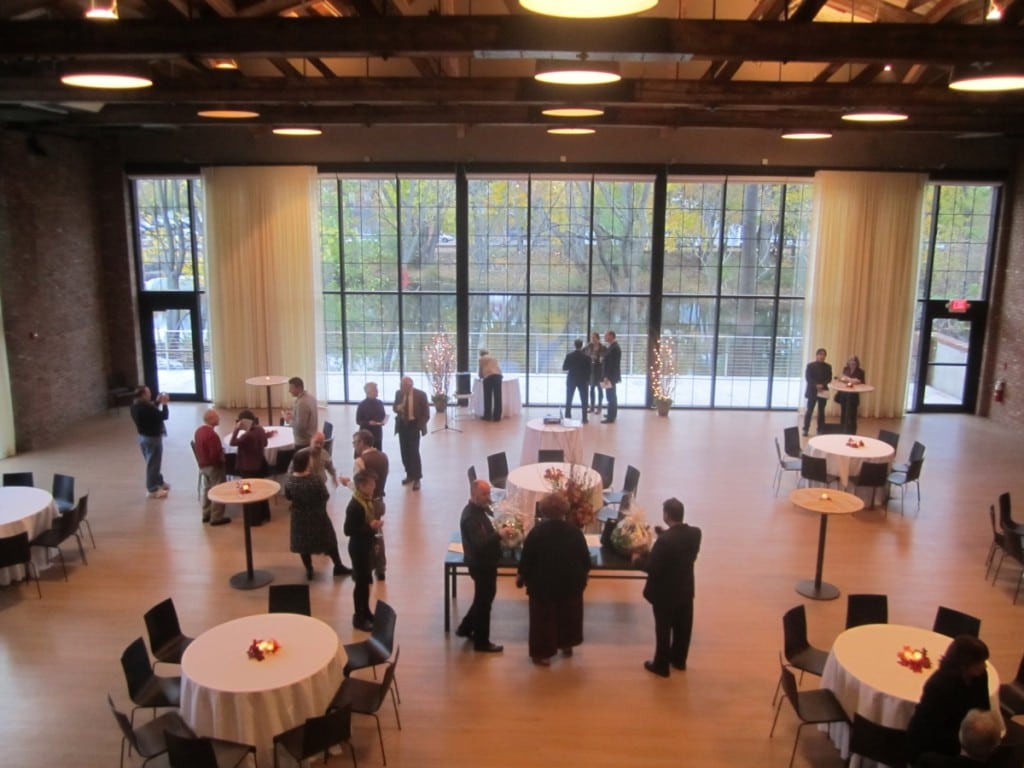 The awards took place at The Roundhouse. Photo by A. Rooney

BeaconArts, which was formerly known by the acronym BACA (which stood for Beacon Arts Community Association), was, according to Vice President Dan Rigney, “created by artists and art-oriented Beacon businesses to be a means by which our creative community members could bring into being their most creative ideas for the community. We are proud to be the sponsor of such events as Beacon Riverfest, Beacon Open Studios, Electric Projected and Electric Windows, Windows on Main Street and more. We help incubate these programs and also promote Beacon at large as a must-visit arts and cultural destination in the Hudson Valley.”

Members now include a cross-section of local businesses, not limited to those directly involved in the arts, but all of whom benefit from association with an arts-driven community. BeaconArts’ mission statement includes action verbs like foster, sponsor, stimulate, provide and encourage — all in support of “the advancement of the City of Beacon as an arts and cultural center.”

The organization formed originally in support of the concept of Second Saturday, which began in November 2002 as an idea germinated by a group of artists and gallery owners. Now very much a constant draw for Beacon, these monthly events include close to 50 participatory venues, not only galleries but restaurants, stores and watering holes of one kind or another. (See our story on Beacon Second Saturday‘s slate of receptions and other activities.)

A large crowd of arts enthusiasts, local politicians and representatives of area nonprofits turned out to enjoy the traditional lure of cocktails, a silent auction (of a photographic series by Philipstown’s Lily Zand), raffled baskets of local wares, and the opportunity to meet each other. A natural venue for the event, The Roundhouse complex itself is emblematic of Beacon’s blend of new-found verve overlaid upon a historic architectural and industrial foundation.

Proceeds from the event, BeaconArts’ sole yearly fundraiser, benefited their general fund, with a portion going to the Clara Lou Gould Fund for the Arts, which funds projects by local artists that benefit the community.

After a welcome from BeaconArts President Linda Hubbard, celebrations began with a photo montage culled from “people, events, artwork, concerts,” giving a visual history of the past 10 years of the organization. The montage was accompanied by a song played by Thom Joyce, one of the evening’s honorees. 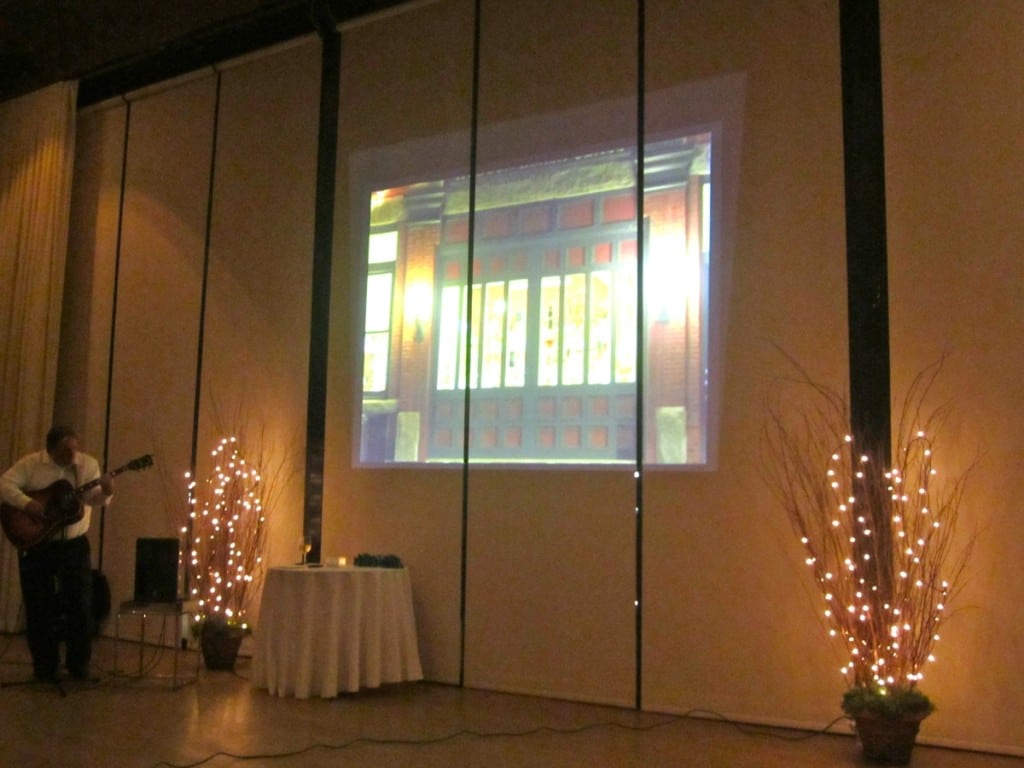 Honoree Thom Joyce also strummed for the crowd. Photo by A. Rooney

A founder of Second Saturday, a musician and sculptor, Joyce was later lauded by art curator Jennifer Mackiewicz prior to receiving his award. She called the honor to Joyce “long overdue.” Noting his involvement with the Howland Center and other Beacon institutions, Mackiewicz said Joyce “always has a big smile and nice things to say — he’s our ‘other’ mayor.”

Joyce told the crowd: “It warms my heart that you came out. I feel odd because I didn’t do this for recognition; I did it because I love this community. I moved here 30 years ago, when it was not a place people wanted to move to. I saw the mountains and river … now buildings are rehabbed like an antibiotic destroying a cancer … Dia came, Van Brunt, Riverwinds — people ask, ‘Where are you going to buy socks? Well, there was no place to buy socks before [either].”

After receiving thanks for hosting the party, The Roundhouse developer Bob McAlpine told the attendees: “It’s always fulfilling to have people in the building — it warms my heart. When my wife and I moved here seven years ago, we never expected to find such a community of art and artisans. A lot of you are represented here, from a local bank to wood refinishers. We’re here, we live here, we’re a part of the community and we want to support you.”

Beacon Mayor Randy Casale offered thanks to BeaconArts for supporting the artists’ community, and he recalled growing up “in this community; it was industrial, grew bad in the ’70s; now it’s a destination, artist-driven.” The mayor also noted that beginning Nov. 23, a new bus service, the “G-Line,” will run a continuous loop Monday through Saturday from 12 to 7 p.m., with stops not only at the train station and tourist attractions but also at places essential to local residents’ needs.

In making preliminary introductory marks about honoree Susan Batton, BeaconArts’ Hubbard noted that Dia’s opening in 2003 “put us [Beacon] on the international map. In 2010 she [Batton] came, and life has not been the same since.” Taking over, John Gilvey of Hudson Beach Glass said: “Dia isn’t just Dia; it’s Dia:Beacon. That informs her decisions about how she interacts with the community. She hired a full-time education director, and she has created programs involving our schoolchildren. Keeping the museum open on Thursdays until Christmas helps Main Street.”

Batton, Dia’s managing director, accepted the award on behalf of Dia’s whole staff, “who got us up and running. … We have two goals: one to strengthen ties within the region and the other to strengthen value within the community.” With that, Batton pulled out a several-feet-long piece of adding-machine tape, joking that it contained the list of all those she needed to thank. 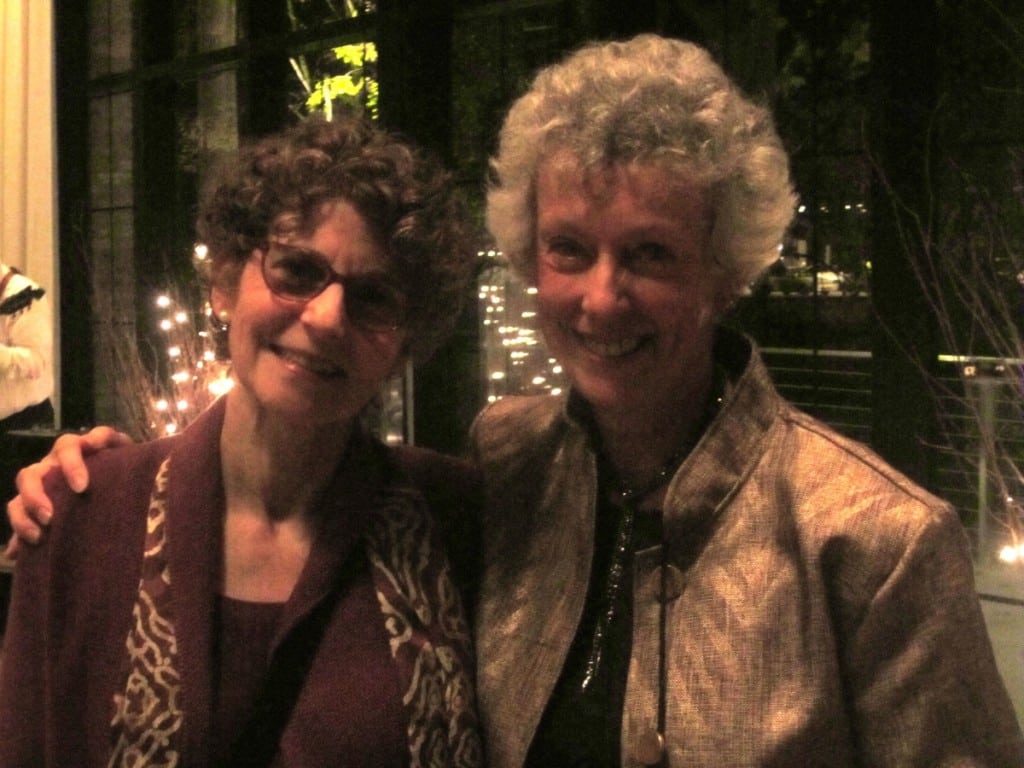 The third honoree was Scenic Hudson’s Margery Groten, project director for Long Dock Park. Beacon business owner Katy Behney urged the audience to “go down and check out the hard work that has been done. By and by progress came, then rain came and Margery was there every day with her helmet on. … She’s mindful to include the community; we couldn’t be happier with the result. Anyone who has been down to the park should thank this woman.”

Groten pronounced herself “touched by this special recognition. Scenic Hudson has been working in Beacon since the early ′90s and has a special connection. … Long Dock Park was a labor of love; the synergies that Beacon brought to us made it feel like a joint effort.” Groten thanked her colleagues and the “far-sighted board” before explaining that the park “needs more time to evolve — it takes a while for a meadow to become a meadow, but seeing hundreds of people enjoying it every day brings me great joy. You will be its stewards in the years to come.”