“Our goal is to find out the extent of damage to the community,” explained Richard Guthrie, of the New York State Office of Emergency Management, one of a trio of experts conducting the PDA. He was accompanied by Eugene Lee of FEMA and Thomas Lannon, Putnam County director of emergency management. 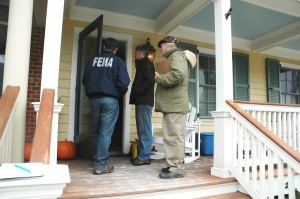 Their tour began at Garrison Landing, then Manitou, along the Hudson River in the southern end of Philipstown, and continued in the lower Main area of the Village of Cold Spring. In Manitou and Garrison Landing, Philipstown Supervisor Richard Shea joined them and in Cold Spring Mayor Seth Gallagher, Trustee Matt Francisco, and Building Inspector Bill Bujarski squired them around, talking to anyone at home.

Some residents were home, as temporary storage pods held belongings on streets, and a stove and furnishings usually found in a home’s interior stood outside. The residents provided details of a basement with seven feet of water while another two feet swept around the house outside, oil running through the streets and into at least one interior, ruined furnishings, lack of heat and electricity, doubts about restoration of electrical and heating elements or placement of those that can be restored so they do not get submerged again, and numerous other problems resulting from the hurricane.

“We’re really hoping FEMA helps us,” Rita Seroski, of 7 Main St., told the damage-assessment delegation. “We have no place to go. We have pets and all” and could not easily leave, she added. Wiping a tear or two, she spoke of the relative bright spots of getting a functioning water heater and partial heat to her home. But she noted her family had been waiting a week or more to hear from their insurance company.

“That is too long to wait,” Lannon commented.

“There’s probably been no insurance adjustors in the entire village,” the mayor observed.

Bujarski pledged that from a building department perspective, “we will do whatever we can” to assist the residents with their renovations. 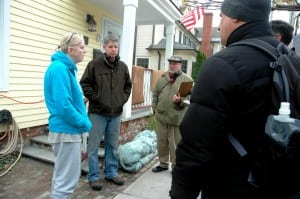 Rita Seroski, left, met with Mayor Gallagher, Richard Guthrie of the NYSOEM, and Trustee Matt Francisco and other members, not visible, of the FEMA assessment team in the lower Main area of Cold Spring after visiting Manitou.
Photo by L.S. Armstrong

Earlier in the day, a waterfront area resident, Karen Phillips, of New Street, blasted Village Board members at a workshop for not doing enough. “We’ve been down there for a week, and we haven’t seen any leaders” of the village, she said. “You should be ashamed; 22 people haven’t seen your face.” Although she complained about the whole board, she singled out Gallagher in particular, adding that the alleged inattentiveness “says a huge thing about your lack of humanity.”

Both Gallagher and Trustee Bruce Campbell, the deputy mayor, responded that they had made numerous visits to the lower Main area. “I’ve tried to make contact with people who are there” and review the situation, Gallagher said. Campbell observed that in addition, before the storm, he himself had distributed optional-evacuation notices door to door but in one case met with skepticism from a homeowner that the waters could rise high enough to pose problems to all the properties.

A few hours later, the damage assessment team and village officials knocked on Phillips’ door. She admitted them all – including Village Board members Gallagher and Francisco.

Meanwhile, a swift-flowing river, brisk breezes, and increasing number of sharp, tiny snowflakes cascading from the skies served as a reminder of another potentially heavy storm on the way.

In Manitou, Shea emphasized the preliminary nature of the exercise. He explained that the county itself will have to be declared a disaster area before FEMA funds can be triggered for resident relief. And that process will have to go through the state government and then on to the federal and ultimately to the White House, Shea said.

Shea also said the town government would not be filing for relief as the town’s infrastructure had not suffered damage.

The following morning, as Philipstown scraped off the snow that fell overnight Wednesday to Thursday, Cold Spring Trustee Ralph Falloon told Philipstown.info of continuing local efforts to assist the storm victims. “Haldane School has teamed up with the Cold Spring and North Highlands Fire Departments,” with Haldane Superintendent Mark Villanti as the contact person for the school, Falloon reported. He described the initiative as “future alums helping current alumni in helping others.”