Board also agrees to hire 2nd lawyer for HDRB

The Cold Spring Village Board Tuesday night (Nov. 20) heard ideas for a new village firehouse from two local architects, who after their respective presentations agreed to collaborate. Long talked about, the proposed new firehouse, estimated to cost $2-$2.5 million, would replace the aging and inadequate structure at Church and Main Streets, home to Cold Spring Fire Company No. 1.

In introducing the presentations, Trustee Ralph Falloon, a CSFC member and former chief, said “this is all about some ideas that can obviously be changed. We don’t know where this is going” so far and “in terms of the money and actual design things will come up that will have to be discussed. We still have a long way to go but we’re finally getting to drawings and numbers we can actually look at, to move forward.”

The architects, James Hartford of River Architects in Cold Spring, and Jamie Copeland of Hudson Design in Garrison, lent their expertise to date pro bono and have provided volunteer professional assistance to the fire company in various ways. 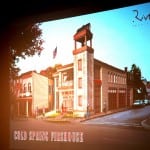 River Architects displayed its version of a new firehouse. Photo by L.S. Armstrong

Hartford led the presentations Tuesday, showing images on the meeting hall wall of his concept. Unlike the main door of the current building, its entrance would be on Church Street. His firehouse would sport a traditional station tower with cupola, second-floor outdoor balcony, and look reminiscent of the current village hall, a former firehouse.

The building likewise would resemble the 19th-century buildings immediately around it, though constructed of modern, efficient materials, with a brick covering. “I wanted to get out there the idea of making the architecture fit the village,” Hartford said. He did not provide a cost estimate.

Like Hartford, Copeland proposed demolition of the existing firehouse. “Retrofitting never pays. It’s always more cost-effective to take it down,” he said. He presented blueprint-style renderings, similar to those he provided for a meeting in September, and said his concept uses a masonry-clad, steel-frame structure, probably with old-style brick exterior.

“Cold Spring has some great examples of brickwork we could look at for reference,” he said. His building would have two stories, elevators, a roof deck, kitchen and other features, as well as space for fire trucks and equipment and other necessities. Moreover, he said, “I like the idea of a tower,” as suggested in Hartford’s drawings, adding that it could provide space for a staircase and “be a place you could locate the siren.” 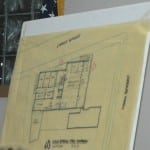 Copeland pegged the costs of his building at $2.5 million. “Is there $500,000 worth of stuff we could take out of there?” Falloon wondered.

The expense could conceivably be shouldered entirely by Cold Spring, or split between the village and Nelsonville and Philipstown. Nelsonville uses the CSFC for fire protection, and so does Philipstown, to provide coverage to some parts of the town.

Mayor Seth Gallagher said Cold Spring would have to talk to Nelsonville and Philipstown leaders and also probably hold a local referendum and put the proposal before the residents. If it goes ahead, the cost “does amount to a pretty substantial increase” in taxes for property owners, he said.

A memo prepared by Village Accountant Ellen Mageean outlined a scenario in which the firehouse would cost $2 million, funded through 20-year bonds with an interest rate of 3.5 percent and finance charges to the village of $140,000 each of the 20 years. “The average taxable value of a house in Cold Spring is $156,887.66,” she wrote. “The new firehouse would increase the taxes on the average house by $134.92. If Nelsonville and Philipstown were to share in the cost, then the increase in taxes for the average house in Cold Spring would be $75.31.”

Falloon said the next steps include conferring with the fire company members to get their thoughts on the designs and other aspects of the project. Meanwhile, it appears the architects will be collaborating as well.

“Why don’t we work on this together?” Copeland asked Hartford, as the presentations wound down. “I’ve been doing this for too long to want to have a turf battle. I like what you do and I think there’s a lot more to be gained by the village if you and I [team up].”

“Sure,” Hartford agreed. “And I think there’s strength in being from the community.”

A second outside lawyer for the HDRB

Later in the meeting, the board returned to a frequent topic of late, the issue of providing outside legal counseling services to the Historic District Review Board. HDRB members have clashed with incumbent Village Attorney Stephen Gaba over interpreting the village code in regard to historic preservation and demolitions, part of the debate over the Butterfield Hospital redevelopment.

On Oct. 23, the Village Board voted 4 to 1 — with the mayor the lone “nay” — to allow the HDRB to consult its own attorney for advice on issues pertinent to the Butterfield project. However, the Village Board did not act on a separate HDRB request to bring in a second new attorney to assist with the HDRB’s upcoming public hearing on demolition of the old hospital. Trustee Bruce Campbell relayed the HDRB’s ongoing interest in a second attorney and suggested the Village Board resolve the matter. “We’ve definitely talked about it enough, and I think it’s well worth moving on,” he said.

Gallagher acknowledged that even Gaba has said that perhaps allowing the HDRB to seek outside legal advice is acceptable, given the HDRB’s doubts about Gaba.  Nonetheless, the mayor said, “I think it opens up a can of worms” to bypass the village’s official attorney and bring in outside lawyers. Among other concerns, “I don’t feel they [HDRB members] are going to get the same representation. I do think that’s detrimental to them,” Gallagher said.

When the board voted on the issue, he again was the only dissenter. Campbell, Falloon, and Trustees Matt Francisco and Chuck Hustis acceded to the HDRB request.

The board unanimously denied an appeal from resident Sue Peehl and her husband, Andrew Hall, to override a decision by Village Clerk Mary Saari, the Freedom of Information officer, to supply them with an email supposedly sent to or from village officials in regard to the shed-building project at 14 Stone St. Peehl and Hall have bitterly opposed the shed, located in the backyard of neighbors.

The Village Board turned down Peehl and Hall on the grounds that no such message could be found in the files of the building inspector, mayor, village attorney, or associate attorney, despite exhaustive searches. “We do not believe it existed, ever,” the mayor told them. The board likewise denied a second appeal, for a purported email involving Bill Bujarski, the building inspector, again because searches produced nothing relevant.

Last August, Peehl and Hall lost in proceedings at the village Zoning Board of Appeals, where they had brought their complaints. They then sued the village.

After their defeat Tuesday night, Hall read a statement accusing Bujarski of “meddling in due process and undermining the trust and accountability required of him as a publicly appointed official. The building inspector’s irresponsibility is contributing to escalating legal costs which either the village or we are ultimately going to bear. This is not fair to either party,” Hall declared. He claimed Bujarski demonstrated “unwillingness to be clear” on the matter. “We demand an immediate answer and clarification,” he said. “A non-response will only deepen our suspicions and we will interpret that as an admission of Bill’s own impropriety or incompetence.”

The mayor defended Bujarski, who was not present. “I think Bill has tried to be as responsible as possible. I think Bill is doing a tough job and doing it well,” Gallagher said.