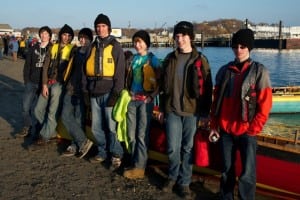 Some of the rowers (photo by Damian McDonald)

According to the HLM, “The Icebreaker draws 200 of the region’s best youth open-water rowers — from Boston Harbor, Lake Champlain, Martha’s Vineyard, Maine’s North Haven, Rockland, Vinalhaven, New Haven, Avery Point, New York City, Plymouth, and Scituate — compete for the coveted ‘Key to the Harbor.’” The young people, from middle school through high school, race throughout the day in a series of round-robin-style heats, culminating in a huge nautical-mile race across the bay.

In their first such event, a “first” and “second” team of fours took to the water, with the first four finishing third in their group and the second four finishing fifth.