Many locals stick with tradition and buy a real tree

A decorated coniferous tree — an evergreen — all decked out with colorful lights and bulbs and topped off with a star, is, by any estimation, one of the most enduring and endearing symbols of Christmas. Locally, Vera’s Philipstown Market on Route 9 is one of the most popular places for families who have not succumbed to the temptation to switch to an artificial tree. The market is run by Vera Giordano, her son Dominic, and her daughters Joanne and Rosa, with seasonal assistance from a number of grandchildren. 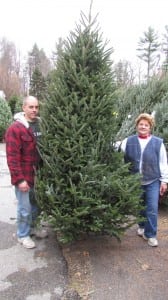 Dominic and Vera Giordano see many of the same customers each year when families select their Christmas trees. Photo by M. Turton

Anyone who has seen the classic film A Christmas Story knows there is much more to selecting the family Christmas tree than simply grabbing the first one seen in the closest sales yard. And with years of experience, no one knows that better than the Giordano family. This year they ordered about 350 trees fromQuebec: Fraser firs and balsam firs. For connoisseurs, those two varieties may be the best available.

Which one you choose may simply be a matter of taste or  practicality. “Fraser firs hold their needles a little better,” Dominic Giordano said. “But balsam firs smell a little better.” He doesn’t even bother with the other species. “No Scotch pine or Douglas fir. I like to keep it simple,” he said. Whether you know one species from the other or not, there is no denying the highly pleasurable, aromatic experience that a walk through the Christmas trees at Philipstown Market offers.

Dominic said that larger trees are the most popular with his customers. “With us, it’s the 8- to 10-foot trees. I get a few 12-footers but not many.” The smallest trees are about 5 feet tall.

For Mike and Denise Swansen of Putnam Valley, the trip to the Philipstown Market to buy a tree is an annual affair. And for the Swansens there is no hint of any desire to go artificial. “That’s not going to happen,” Mike Swansen said. They buy a Fraser fir — the biggest one available. “We have cathedral ceilings, so we like a big tree — 10 feet or more.”

The Swansens are typical of Giordano’s customers who have a strong bias towards real trees. Ironically, the one person who would rather go artificial is his mom, Vera. “I don’t like all those needles in my house,” she said. While she may not like it, her children seem to make it a mission to keep her house smelling of an authentic tree. “She’d like to have a small tree, but we always give her the fattest one we can find,” Dominic said. His mother goes along, but not without conditions. “The tree has to be taken into her house wrapped in a blanket,” he said. “And it has to leave the same way.”

Bob and Loren Carpino, owners of B&L Deli just down the road from the Giordanos, dropped by the Philipstown Market at the same time as the Swansens, but not to buy a tree. “We cut our own tree on our property this year,” Bob Carpino said. “It was growing under an oak tree and one side of it didn’t even have any branches. I was going to throw it out but Loren said not to, that it had to be our Christmas tree. It’s our Charlie Brown Christmas tree. We re-purposed it.”

The Carpinos are not alone. Dominic said that every year “a lot of people, maybe eight to 10 customers, ask for the ugliest tree in the lot. It’s hard to do — we buy only premium trees,” he said.

One customer Dominic sees every year symbolizes what the selection of a Christmas tree can mean as part of family tradition. “She comes with her family every year, including three kids. They pick out a tree and then they take their picture standing next to it.” He said that one year the woman brought her photo album in to show Giordano her Christmas tree photos from years gone by. “She’s been doing it for at least 12 years,” he said.

Christmas tree selection can sometimes underline what might be considered a social or family dynamic. “Sometimes the husband will say to his wife, ‘Pick out whichever one you want,'” Dominic said. “Then when she picks one out, he says, ‘I don’t like that one!'” A family discussion usually ensues at that point.

Timing is also a factor in tree selection. “Most people buy a bit early, like by the Dec. 8 weekend,” Giordano said. “Only a few come in at the end.” He also said that some families still honor one very old tradition — decorating the tree on Christmas Eve. “I get about five or six people every year who buy their tree early and ask me to set it aside for them. Then they come pick it up on Christmas Eve.”

Dominic has some safety advice for customers. “I’d put the tree up about two weeks before Christmas. Before that, you really have to keep it well watered, and keep the house cool,” he said.

Trees at Philipstown Market range in price from $50 to $130 depending on size.

Local Boy Scouts will be selling Christmas trees again this year, for two days only at the baseball field next to the North Highlands Firehouse. Residents who want to support Boy Scouts can buy a locally grown tree on Saturday, Dec. 8, from 9 a.m. until 4 p.m. and on Sunday, Dec. 9, from 9 a.m. until 2 p.m., or until the supply of trees sells out.

Philipstown Volunteer Ambulance Corps (PVAC) also sells Christmas trees at their station on Cedar Street behind Philipstown Town Hall. Six- to 8-foot balsam firs are available for $50 with all proceeds going to support the PVAC. Christmas wreaths are also available.

The origin of the Christmas tree is ancient. Even long before the start of Christianity, coniferous trees held special meaning in winter. Evergreen boughs were hung over doors and windows in people’s homes. Many believed that evergreens would keep away witches, ghosts, evil spirits, and sickness. Learn more about the history of the Christmas tree at history.com/topics/history-of-christmas-trees.