As New York state’s Department of Environmental Conservation’s (DEC) comment period on the controversial process of hydraulic fracturing (also known as hydro-fracking) for natural gas continued Wednesday, Dec. 12, Assemblywoman Sandy Galef announced she is introducing legislation to make sure that some of the negative impacts gas drilling can have will not harm New Yorkers. 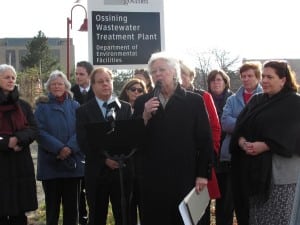 Assemblywoman Sandy Galef announces plans to introduce legislation banning the use of fracking byproducts at a press conference on Wednesday, Dec. 12.

“The chemicals that are used in the process of extracting natural gas from shale rock formations can have unintended consequences,” said Galef. “We know that there is a toxic mix of chemicals needed in the high-pressured water used to blast through the layers of the earth. When that water comes back to the surface, companies are finding ways to dispose of this brine by selling it for use as a deicer and dust reducer on roadways. This contaminate water also is finding its way to wastewater treatment plants that do not have the capability to adequately treat it. I want to make sure this type of product is not being used on our roadways, nor should we allow it to be sold through state contracts,” she emphasized.

Galef will introduce legislation at the beginning of the Assembly’s 2013 session that will disallow use of fracking waste byproducts, which could harm the environment. On Monday, Dec. 10, the Westchester County Legislature unanimously passed legislation introduced by Legislator Catherine Borgia that would ban the use of these harmful byproducts on county roads and keep them out of wastewater treatment plants as well.

“I am so pleased the County Legislature has come together as a bipartisan unit to pass this important legislation,” Borgia asserted. “While the Marcellus Shale is not geographically contiguous with Westchester County, gas companies have to go further and further to find ways to dispose of fracking waste. We all want to ensure the safety of our residents as well as the continued fertility of our land and our clean water. I applaud Assemblywoman Galef’s efforts to extend these important safeguards statewide, which we have passed for Westchester County,” she said.

“Whether or not high-volume horizontal hydro-fracking is permitted in New York state, the disposal of highly contaminated and radioactive gas-drilling wastewater, drill cuttings and sludge is an immediate public health threat for all New Yorkers. Waste from existing vertical gas wells in New York as well as fracking operations in Pennsylvania is being spread on New York roads and being accepted by New York landfills and water treatment plants,” said Patti Wood, executive director of Grassroots Environmental Education, a New York-based environmental health nonprofit. “With lax oversight from the state and an absence of federal regulations, local governments are filling the void and stepping in to protect their citizens from harmful exposures. We strongly commend the Westchester County Board of Legislators for unanimously passing legislation that will prohibit the sale, disposal or use of waste from hydro-fracking operations in this county. Assemblywoman Galef should be commended for proposing legislation that would ban gas drilling waste from being used on any state roads.”

“I thank the environmental groups for bringing this important issue to the county, and for Legislator Borgia for coming to me,” said Galef. “Working cooperatively is the best way for us to ensure clean water and clean air. Today [Dec. 12] is the first day of a 30-day extension to the comment period when people may once again submit their comments on hydro-fracking to the DEC. I urge everyone in New York to submit comments, especially those who have specific information on health impacts, that could be helpful as the DEC continues to evaluate the consequences of hydro-fracking for New York state.”

“We should not risk our residents’ health and safety by risking contact with these hazardous, poisonous, dangerous materials,” said Assemblyman Thomas Abinanti.

Member of Assembly Amy Paulin said, “I am pleased to co-sponsor Assemblywoman Galef’s legislation to make sure we take the steps needed statewide to protect human health from these fracking byproducts.”

Last year, the Assembly passed a moratorium calling for an extension on the period to decide if hydro-fracking should be legal in New York state to allow more time for studying the impacts. While this effort did not pass the Senate, the governor recently issued orders calling for a health study, which the Assembly had also called for earlier this year, before the DEC could complete its recommendation.