Enticed by the idea of being a human representation of an alien being who is attempting to present humanity with a message of hope? Yes? No? If it’s a no, instead how about assuming the role of a musician assuming the persona of a rock star destroyed by his excesses? 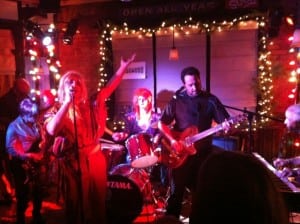 Five musicians, who range from complete beginner to experienced professional, will be doing just this as they present — in only its second performance anywhere — the 40th Anniversary Tribute to David Bowie’s The Rise and Fall of Ziggy Stardust and the Spiders From Mars. These five, Nancy Dolin, Ben Junge, Philip Nobel, Evan Schwartz and Ken Strauss, participated in a 12-week Beacon Music Factory Rock Band Boot Camp devoted to recreating the classic David Bowie 1972 glam-rock concept album.

Bowie himself was inspired by a hodgepodge of sources in creating Ziggy Stardust (which he first envisioned as an onstage rock musical and then evolved into a concept piece for an album), including a real-life delusional and spiraling-down British rocker (Vince Taylor), an eccentric American country-western singer who called himself “the Legendary Stardust Cowboy” and a tailoring shop called Ziggy’s, which caught his eye as he passed by on a train frequently. From this, he created the character with which, to this day, he is identified. About his creation, he has said, “I liked the ambiguity of not being able to separate the personas.”

The persona of a rock star is not necessarily the day-to-day reality of the five people who signed up for Stephen Clair’s Ziggy Stardust workshop. In fact, Clair wasn’t initially sure anyone would be interested. Clair had done many Rock Boot Camp workshops, for kids and, separately, for adults, previously, but with this one he wanted something different. 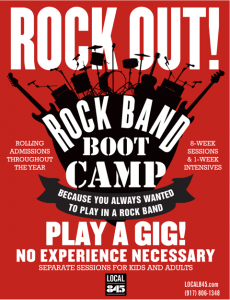 Clair explained: “We had a really successful adult band camp over the summer. They really bonded and have continued to be a band. (Called Odd Man Out, they will open the Living Room show.) The adult camps are so rewarding and satisfying because they create an opportunity for the middle-aged and older to live out aspirations. I was so inspired by that potential, I thought, ‘What if I go out on a limb and have the next group learn a record from beginning to end?’ It’s more challenging, but the immersion means that there will be songs everyone knows but also the weirder stuff, and the learning process becomes a beginning-to-end process.”

Clair was “flooded with ideas of impactful albums to pay homage to. The ’60s and ’70s saw many records that have a timeless quality and have resonated. Ziggy Stardust came up, and it seemed like one of those kinds of albums. I was worried that it might be too specific — a niche — but it turned out that each of the five people who signed up had a personal story about it; three saw Bowie in that era and said it changed their lives. That I got these five was great. We decided to make the camp 12 weeks, as it took that amount of time to get through it, learn the parts and refine it.”

Schwartz, one of those five, and the closest to a “real” musician — he plays and teaches guitar — was one of them. He described the process of Rock Boot Camp: “Strangers sign up. One hadn’t played since his teens. One woman only started playing guitar last year. There’s no experience necessary. We met as a group, and started right in with the first song at the first rehearsal.”

Clair added: “Generally 80 percent of the people have guitar experience. We hear lots of ‘I used to play 20 years ago.’ They’re dusting off their bass. Even if they have some skills, I tell them to forget their comfort zone and that they will be challenged. As none of these five were drummers, everyone played drums on at least one song, and everyone got at least one vocal.”

Schwartz had a different take on it: “It’s really like, get your yayas out. We learned the whole album, and since we had no strings and no sax, we learned the sax lines on the guitar. Stephen got us started with basic chord charts, and then he coaches. Eventually you basically take on being in a rock band.”

The workshop culminates in a performance, which for Ziggy Stardust meant dressing in costumes for their first gig — the audience too, was invited to “break out the gold lamé” — opening Beacon’s new bar, Dogwood, which took place on Dec. 15. According to Schwartz, “the place was packed, mobbed, and it was just a blast.” Clair called it “an epic success.”

The group hopes to recreate that ambiance at their second performance at The Living Room (whose co-owner Philip Nobel just happens to be doubling as a band member) playing not only the hits like “Starman” and “Suffragette City” (with vocals from the band’s only woman, Dolin) but the lesser-known tracks as well.

In 1997, Bowie was quoted as saying, “I think that Ziggy would be surprised that one, I’m still alive, and two, I seem to have regained some sense of rationality about life and existence.” Perhaps rationality about life and existence includes the realization that things like Rock Boot Camp for adults are things to be embraced. That appears to be the case, as the next session, which will tackle The Clash’s more-than-classic London Calling, is already full.