The ancient Greek masks of comedy and drama overlap and intertwine courtesy of the happily demented mind of playwright Charles Ludlam, who headed the Ridiculous Theater, a fixture in Greenwich Village at the Sheridan Square Theater during the 1970s and ’80s. Ludlam adapted the ancient Greek tragedy, written by Euripides in 431 B.C., tapping easily into its eternal theme of revenge and justice in an unjust society to tell the tale through the scrim of a parody on melodrama, but never losing sight of the power of the original.

Weaving his trademark “wit, parody, poignant melodrama, satire, detailed literary references, gender politics, clever manipulation of language and image … and a plethora of acting styles” (David Kaufman, The Life and Times of Charles Ludlam) into one of the canons of Western theater, the plot closely follows the original as Medea, a barbarian woman brought to Athens by her husband, the great warrior Jason, finds her position in his world threatened by his liaison with a princess who gives him access to greater political powers.

Described as a “possessor of a personal yet influential vision of modern American stage comedy as a synthesis of wit, parody, vaudeville farce, melodrama and satire,” Ludlam had “pursued this vision as a superb actor, inventive director, delightful designer and — most significantly, prodigious playwright, with a year-round company dedicated exclusively to producing his works” (Steven Samuels, “Charles Ludlam, A Brief Life”). In 1984, the Ridiculous Theatrical Company had its greatest commercial success with The Mystery of Irma Vep, which, incidentally became the most produced play in the United States in 1991 and became the longest-running play ever produced in Brazil. Ludlam’s death from AIDS, at age 44 in 1987, cut short his rising career.

World’s End Theater is presenting this work, one of about 30 plays of Ludlam’s, all of which satirized a particular genre or literary style, as part of its 20th-Century Classics play-reading series, which takes place monthly at the Philipstown.info/The Paper space at 69 Main St. in Cold Spring. The readings are free and with seating on a first-come, first-served basis. Arriving early for the 8 p.m. performance is suggested, as previous readings have had large turnouts. 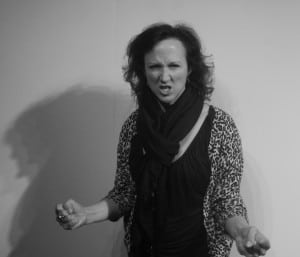 Director Alison Rooney (Philipstown.info / The Paper’s arts editor and reporter) has assembled what she calls a “willing, hammy and very adept” cast headed by Christine Brooks Bokhour as Medea. Bokhour was seen in World’s End’s full production of The Way of The World last year and who has appeared on Broadway in Chicago and Cats.

Joining her, playing an assortment of good kings, not-so-good kings, a messenger, tutor and nurse will be Dan Anderson, Michael Heintzman, George Kimmel and Sterling Swann. Haldane High School students Alison Duncan, Mina Elwell, Aidan Gallagher and Emma Kimmel will be commenting constantly on their peers, as teenagers are known to do, as the Greek Chorus. Haldane’s drama class, an English department elective, read the original Medea earlier this year.  Rounding out the cast are Lucy Austin and Harper Levy, with Kieran Austin providing melodramatic accompaniment on the piano.