Collectively, groups and the activities they pursue are a big part of the character of any community — whether it’s the Lion’s Club, Little League Coaches Association, Chamber of Commerce or volunteers at the local food bank. A new group recently formed in Philipstown reflects the continuing evolution of local demographics and the changing, professional career paths that some newer residents are following as they earn their living in this area. 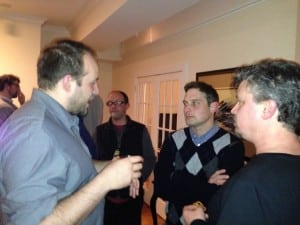 Part of the group’s raison d’être is simply to bring together people with a common interest in the varied and interconnected aspects of digital technology and to share experiences, ideas and questions — in this case over a beer or glass of wine.

PTG mirrors the “Meetup” phenomenon, which offers a myriad of groups in many locations nationwide, assembling participants interested in just about any topic the imagination can conjure up — from hiking and Wicca to cooking and model building. The difference is that the Philipstown Tech Group is very local and is already expressing interest in serving its local community.

The group’s members are young, and many have moved up to the Philipstown area from New York City, some quite recently. Chris Daly, a design consultant who did just that in May, said of the emerging group, “We’re like the artists from Brooklyn who moved up to Beacon.”

If their digital world is complex, their meeting was not. People introduced themselves, gave a quick synopsis of their background and commented on what, beyond basic networking, they would like to see the fledgling group concentrate on in its formative stages.

A number of members have young children attending school at Haldane, and it quickly became apparent that one of the group’s initial thrusts will be to work with students, parents and staff there to help provide greater exposure to digital technology as part of the learning experience, including younger students. There was also a strong consensus that creating a shared workspace in Cold Spring, one that caters to professionals working in digital technology, should be a priority. Volunteer committees were formed to begin work on both initiatives. Also discussed was the possibility of setting up an online job and idea board for the group.

There was even talk of Cold Spring becoming a hub for digital technology. The idea of Main Street becoming known more as a center for digital-technology-related businesses than antique shops resonated with the group and with Dave McCarthy, PTG’s coordinator. McCarthy manages Tightrope Interactive, whose head offices are located in San Francisco.

He thinks Cold Spring’s location gives it great potential for tech-oriented businesses, that being somewhat removed from New York City but close enough to get in and out easily is a plus. To be a tech hub, he said that a locale has to be “far enough away from the city that’s not a suburb.”

Cold Spring, McCarthy said, also offers businesses real estate prices that are more affordable than New York or San Francisco or even Westchester County. “And it’s beautiful here. It’s a nice place to live, and that’s a big part of it,” he said, drawing a parallel with Boulder, Colo., which he said is known as “a really cool tech hub.”

Within a day of the meeting, PTG members had already set up a Google Group and a Facebook page at facebook.com/PhilipstownTechGroup. Anyone interested in joining the Philipstown Tech Group or attending meetings should email McCarthy at [email protected] The group plans to meet monthly.

3 thoughts on “Digital Technology Pros Moving to the Area”