On a cold winter’s day in the Hudson Highlands, the last thing on some people’s lists of fun things to do is “go on a bike ride,” especially over this area’s many daunting hills (just think of Route 301). Yet a growing number of people have exactly that as their top priority, and they’re getting their exercise while enjoying the natural beauty of the region on their bicycles. This includes members of Team Highlands Xtreme (THX), a group of cyclists who live and cycle in and around Philipstown, and whose motto is “no off-season.” 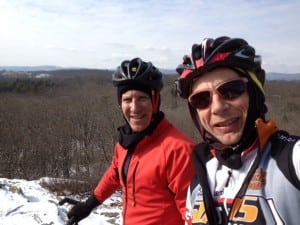 THX members Glenn Lowry (director of MoMA), left, and Morgan Stebbins out for a bike ride near Fahnestock on Sunday, Feb. 3. Photo courtesy of Morgan Stebbins

In the winter, cyclists like Garrison resident Morgan Stebbins, founder of THX, may opt to do more mountain biking or cycle-cross (riding over pavement and wooded trails on bicycles that have lightweight frames and tires with more traction) than regular road cycling, because the wooded areas tend to protect riders from the wind that might deter them on the roads.

Stebbins, a Jungian psychoanalyst and New York Zen Center for Contemplative Care faculty member who happens to have 187 cycling wins under his belt, cites the great riding in the Hudson Highlands as one of the main reasons he and his wife moved here from Rockland County seven years ago. “It’s so beautiful here, so hilly,” he said, noting the dirt roads as well as trails for mountain biking. He mentioned Blue Mountain in Peekskill and the woods in Fahnestock Park as great for mountain biking, and he said that “the road riding is great in all directions — north, south, east, west.”

When he first moved here, Stebbins participated and won first place in the now defunct Cold Spring Triathlon, a race of running, cycling and kayaking. He was talking with the third place winner that year, fellow Garrison resident Hank Osbourn, who said he wanted to start bike racing, and a training regimen and friendship formed. They rode on mornings with Cold Spring resident and chiropractor Greg McCoy, who used to be a bike racer. That core band of three later developed into the group now known as THX, which began meeting regularly on Tuesdays and Thursdays at the corner of Snake Hill Road and Route 9D but which now starts from the Desmond-Fish Library. 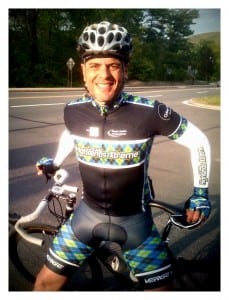 “We picked up people on the road,” Stebbins said, explaining how the group grew by stopping to talk to other cyclists. Once they met up with Garrison’s Clemson Smith Muñiz, a sports broadcaster known as the Spanish voice of the Knicks and the Jets, the group grew even more. “He’s very garrulous,” Stebbins said of Smith Muñiz. “He’s such a friendly guy — anytime we ran across anyone in the area, Clemson always stopped them.” This earned Smith Muñiz the role of social coordinator for THX.

Smith Muñiz is not a racer, but he tries to ride about 200 miles over five days a week. He began cycling as part of physical therapy for a knee injury he had years ago, and he hasn’t stopped since. That love of cycling unites the members of THX. “Our basis for friendship is we love the bike,” said Stebbins.

Both Smith Muñiz and Stebbins also emphasized the fact that they’re not all about racing or riding fast. Many in THX are recreational riders, so the group offers two rides on the weekends: an “A” ride for those who want to ride fast and a “B” ride for those who don’t want to go as far, as fast.

The group tapped Paula Provet, a high school math teacher in New York City who spends weekends in Garrison, to lead the “B” rides. Under her maiden name of Paula Andros, she was cycling champion of the Empire State Games from 1979-81 and placed fifth in the Cycling National Championships in 1981. After she stopped racing, she brought competitive cyclists to and later led bike tours in France. Now no longer interested in racing, she doesn’t observe the “no off-season” motto and prefers to go hiking here during the winter.

Provet, like Stebbins, cited the cycling in the area as one of the reasons for purchasing a home in Garrison about seven years ago. Her favorite places to cycle are in Harriman (according to Stebbins, “one of the most beautiful parks in the world”) and Bear Mountain State Parks, West Point and Storm King, and on roads like Peekskill Hollow Road that were used by the Putnam Cycling Classic last October.

Smith Muñiz, who moved to Garrison 14 years ago, named the same places for good local cycling. He said cycling has allowed him to see all sorts of local wildlife, including foxes, coyotes, deer, eagles, hawks, skunks and porcupines. 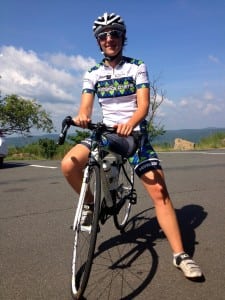 Jenn ‘Queen of the Sprint’ Magur, a nurse and Washingtonville native, comes across the river to be part of THX, whose jersey she wears proudly. Photo by Clemson Smith Muniz

“This area, on both sides of the river,” he said, “has some of the nicest [places] in the country for riding. It’s pretty, and you can ride on pretty well-kept roads, without much traffic, and people don’t realize this — it’s a little mecca.”

His love for cycling and for the area led him to attend the Cold Spring Village Board’s meeting on Tuesday, Feb. 5, to speak in favor of holding the start and finish of the Putnam Cycling Classic in Cold Spring in May. Though Smith Muñiz did not participate in last year’s Cycling Classic, many THX members did as a team.

Smith Muñiz doesn’t want to focus solely on that one-day event, however. “The event is nice, but I’m here to push Cold Spring/Garrison/Putnam County as a year-round destination for cyclists. What we have to do is use this race, this event, to embrace the bike culture,” he said.

Part of embracing that bike culture, he said, is education, particularly on traffic laws. Many drivers are unaware that New York state law allows cyclists to ride two abreast; nevertheless, THX members stress the importance of riding single-file, out of courtesy and respect for drivers.

Smith Muñiz admitted that not all cyclists are as courteous as everyone would like. “Just like there are unruly customers, there are unruly cyclists,” he said, seeming to address some merchants’ complaints about cyclists in their establishments. “It doesn’t mean you stop being nice to people.” He reiterated the fact that there are already many cyclists living in the area, and he pointed out that they often have disposable income.

When asked whether he thought visiting cyclists would patronize village businesses the day of the race, Smith Muñiz said, “You may not score big on race day, but if people get a sense of community, and they’re within a 100-mile radius, they will come back to ride.” He thinks they may also come back with friends or family to visit.

He gave the example of the Berkshire Cycling Classic that was held in Lenox, Mass., in May 2012, when a group of THX members rode as a team and stayed at a bed and breakfast and dined there. “If the Berkshires can pull it off, why not us?”