Formula-business ban being added to the mix

At the Cold Spring Village Board Tuesday night, Feb. 26, the trustees and Butterfield developer Paul Guillaro managed to execute a diplomatic dance that signaled a tentative return to consideration of the multi-use proposal for the property rather than Guillaro’s recently threatened residential home concept. The residential idea resulted from Guillaro’s reaction to the negative testimony from many residents at the recent public hearing regarding the proposed zoning change that both the trustees and Guillaro had thought was the way forward for developing the 5.7-acre site. 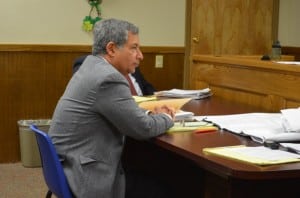 Developer Paul Guillaro listens to trustees at the Feb. 26 Village Board meeting.

In addition, the trustees continued work on drafting a local law banning formula businesses in the village. Expedited work on the ban, which the adopted village Comprehensive Plan recommends, is in response to the concern of many, including the trustees as well as the other candidates running in the March 19 village election, that proposed buildings on the Butterfield site not contain such businesses, especially if some or all the discussed governmental services don’t materialize.

The conjuring of yet another attempt at a meeting of the collective village mind on Butterfield came fraught with difficulties and potential obstacles. The trustees, although appreciative of Guillaro’s return to the table, did not have an organized response to his appearance. Each in turn expressed generally positive support for the project and offered praise for Guillaro’s work in the past without getting too close to the tripwire issues involved.

Guillaro for his part indicated a willingness to return to the much-discussed multi-use concept but only after “the concerns of the various boards are worked out before I come back.” Just how such a result could be accomplished, even in conceptual terms, was not clear, although trustees and Village Attorney Stephen Gaba suggested some kind of conceptual roadmap could be drawn up indicating agreement on broad issues before the more technical considerations of either the Planning Board or the Historic District Review Board were undertaken.

Guillaro said further that he was looking for a clear demonstration from the trustees that they supported the project and that they would work to see the other boards involved understood the elected officials’ view of the situation.

Mayor Seth Gallagher, acknowledging he would soon leave office, asked Gaba to come up with a possible timeline and direction the trustees could follow in reconsidering the project. Such a timeline would have to include a number of potentially lengthy steps. Guillaro emphasized he had already spent a great deal of money on the proposal so far and didn’t want to spend more unless a clear scheduled path could be discerned.

Earlier in the board meeting Gaba presented a draft local law that would prohibit chain stores and restaurants (known in legal terms as formula retail stores and restaurants) as well as drive-thru windows within the village. After discussion, Gaba agreed to redraft the law to reflect some changes that board members wanted to make, starting the process of getting the ban into the Village Code.

Large turnout for the Feb. 26 Village Board meeting to hear Paul Guillaro speak about the Butterfield project.

Discussion of a ban on formula businesses began last summer, after a Dunkin’ Donuts was proposed (and finally approved in December) at the Elmesco service station on Route 9D, and residents grew concerned that more franchises could be on their way to the village. In September, Gaba presented a memo that outlined cases in which municipalities were challenged on similar bans. (He had found that the villages whose laws prevailed in court cases were those that had strong factual bases for their bans.) The Comprehensive Plan Special Board was then asked to conduct a study on the feasibility of enacting such a ban in Cold Spring, and their report (available at coldspringny.gov) was presented to the Village Board on Feb. 12.

The purpose of the law, it states, is to protect from the negative impacts of formula restaurants and stores and drive-thru windows “on the village’s unique character and economic vitality.”

Similarly, a formula retail store is any business that has the same name or trademark; exterior or interior signage, design and/or architecture; the same uniforms; or standardized merchandise as others in a chain or group. Gas stations and financial institutions such as banks are not included in the definition of formula retail store.

Gaba did add, however, a provision that excluded grocery stores, because it would be particularly difficult to find an independent supermarket. Board members added that independent drug stores would be similarly difficult to find, so Gaba will add a provision that allows certain uses by special permit (granted by the Village Board) in his redraft.

A drive-in window was defined in the draft as “a feature or improvement which permits customers to receive services and/or paid goods while remaining in their motor vehicles.” Gaba also recommended getting rid of the term “customer shop” in other places of the code and replacing them with the now defined term “retail store.”

While Gaba said that the Special Board’s report on formula businesses “really lays out the case for adopting something like this,” he said for the law to hold up in court, it would need “some more factually detailed information,” as the stronger municipal laws tend to have. He recommended looking particularly at the business districts along Route 9D, to provide concrete research for adopting the law, whether it be on issues of community character, village aesthetic, traffic flow or pedestrian traffic, “so if you’re challenged later on, you can say, ‘Hey, we didn’t just do this arbitrarily; we really looked into this carefully.’”

Mayor Seth Gallagher pointed out that the Special Board was working on such a report, and Special Board Chairman Mike Armstrong added that the committee would present that report at their meeting Thursday, Feb. 28.

Some board members expressed a desire to protect those businesses already established in the village that are or could become part of a chain (such as the approved Dunkin’ Donuts or the existing Frozenberry), which could be “grandfathered in” (i.e., follow the current law) with a provision in the code. Gaba’s redraft may include such a provision.

Next steps, Gaba said, would be for him to circulate the redrafted law to the Village Board and Special Board, schedule workshops to invite public comment, and to start the State Environmental Quality Review (SEQR) process.