Opening on Beacon’s Second Saturday on March 9, from 6 to 9 p.m., are two March exhibitions at bau Gallery, 506 Main St. in Beacon. The shows run through April 7. 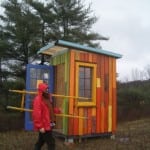 Hillsley and Draper moved from New York City to the Hudson Valley to start a family. They both grew up in small communities and wanted to raise their family where there was strong sense of place. Over a decade later, their family has grown to include an extensive creative community that continues to feed and support them.

Both artists trained in object-based art practices. Their current practice has become a hybrid of personal and social practice with the growth of their Habitat for Artists (HFA) Project.

“The community is important,” said Simon. “The artist does not work in isolation; they both outwardly mirror and reflect upon the issues and context in which they live.”

The couple participated in their community initially by teaching in their son’s elementary class, at the local recreation and art center as well as organizing various shows at the local library and other spaces. This involvement formed the basis of other actions and eventually to their forming HFA. “It was all about examining the role of the artist in a community, not just having a studio and maybe showing work locally,” said Hillsley.

A recent collaborative work, Insatiable Doing, is a collage of different material. The piece is made up of a lot of small 5-by-5-inch parts. The other work in the show reflects their own object-based practice with an assorted mix of drawings, prints and sculpture from the past decade. Some of the works may be familiar to the local community, having been shown previously in the area. One of the walls includes a Brief History of the HFA project.

Hillsley said: “HFA is like the process of quilting. Artists and the community are invited to bring their world, their art-making process and their lives, like pieces of fabric, to be shared and stitched together. All the small pieces come together to make a whole. This becomes more than making an art product; it is the experience of process, of living LIFE. Making Community Through Making. “ 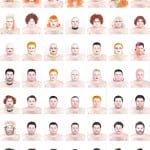 Transformations is a playful meditation on gender, beauty and drag. Paying particular homage to Boy George, Annie Lennox, Leigh Bowery and the New Wave movement of the 1980s, Kahn presents himself in an ongoing suite of life-size self-portraits. Underlying the humor and play of these various expressions of beauty and gender is an examination of issues of masculinity, identity and queerness, both on the part of the artist and the viewer.

Transformations is presented in a grid and always in an odd-numbered set of images, always playing with the tension of the perfect and the imperfect, the regular and the queer.

Originally trained as a painter and printmaker, Kahn currently employs photography, graphic design, traditional handicrafts and sculptural techniques to explore gay male sexuality and concerns over the division between public and private space, and between personal and national security.