Board signs own resolution on high-stakes testing

The current estimated tax levy increase still hovers at almost 4 percent, but Colucci said they are working to reduce this number as much as possible. Public input is encouraged at budget workshops, with one being held during the PTA’s Friday morning meeting, and others at 10 a.m. on Saturday, March 9, and 7 p.m. on Wednesday, March 13. If the estimated tax levy increase appears unacceptable to taxpayers, the district would have to decide where cuts would need to be made.

With the federal budget now in sequestration, Colucci explained, there is a possibility of losing some federal aid in the form of Title I (which helps students from low-income families), special education and Rural Education Achievement Program funding (which totals $143,000). Because federal education funds would be cut by the sequester, school districts are projected to lose about 5-10 percent of their federal aid, which for the Garrison School could be up to $13-14,000 (at the projected 10 percent cut). 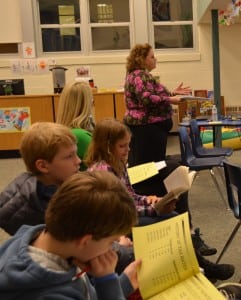 David and Ben Higbee, in the foreground and accompanied by their family, listen to the Garrison School Board budget presentation on March 6 as part of Boy Scouts merit badge requirements, as Sue Huetter speaks to the board. Photo by J. Tao

Now known are a majority of next year’s high school placements, which helps finalize numbers for tuition expenses. Eighth graders graduating from Garrison Middle School this spring were to make their decisions by March 1. Seven have chosen Haldane High School in Cold Spring, 14 have chosen O’Neill High School in Highland Falls, and one will attend a private school.

Colucci said one reason that more students chose O’Neill is because they already have siblings there, but on the downside O’Neill’s tuition is higher this year. Students attending private school, however, reduce the tuition that the district must pay.

After these slight adjustments, the estimated tax levy for the 2013-14 budget showed an increase of 3.89 percent from last year, with 3.94 percent as the maximum allowable increase to stay within the state mandated 2 percent tax cap. (By law, some expenses are exempt from the 2 percent tax cap, which is why the allowable tax levy can be over 2 percent.) Colucci said they are now working to reduce that levy increase if possible.

Reasons for the higher tax levy this year include drastic reductions in government aid and large increases in employee benefits. State funding will not be certain until the governor’s budget is finalized on April 1, but as presented at the last school board meeting, the anticipated loss from last year’s amount is over $100,000. State aid has decreased substantially — about $330,000, or 35 percent, over the last five years, requiring the district to replace lost revenue with reserve funds and taxes. While aid decreases, expenses continue to rise, with increases in the Teacher Retirement System and health insurance, and now more employees are joining the health plan.

Other increases include contractual salary increases for employees, but some reductions have resulted from reducing the social worker’s appointment to one day per week, at her request, and the retirement of one teacher this year. Through attrition, with about three full-time teachers and one teacher aide retiring and not being replaced over the last three years, the district has avoided the cuts to staff or programs like some districts have had to make in order to stay within the mandated 2 percent tax cap.

Disagreement at the last board meeting (Feb. 24) over whether to sign a national resolution created by FairTest, against the use of high-stakes testing in schools and teacher evaluation, seemed resolved at Wednesday’s meeting with the signing of a resolution crafted by School Board President Raymond O’Rourke to reflect more local issues at Garrison School.

While his local resolution did not call for an end to the use of standardized test results in teacher evaluation, as the FairTest resolution had, O’Rourke’s version expresses dissatisfaction with “an overreliance on high-stakes standardized testing in state and federal accountability systems” that “can undermine educational quality and equity in U.S. public schools.”

The resolution calls on the governor, state legislature, education commissioner and Board of Regents to “re-examine public school accountability systems with the goal of developing testing requirements that more accurately measure the quality of students’ entire learning experience,” to fund any new or additional testing costs, and “that school districts whose students consistently exceed NYS established educational achievement targets are provided exemptions from certain testing requirements.”

The board passed the resolution unanimously.