Parishes’ primary goal is to help others 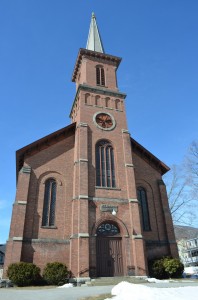 Two impressive historical buildings in Philipstown are the United Methodist Churches of Cold Spring (on Main Street/Route 301) and South Highland (on Snake Hill Road at Route 9 in Garrison). Though their parishes and buildings differ, they share the common faith of the United Methodist Church (UMC) as well as a common pastor, Rev. Margaret Laemmel (known by congregants as “Pastor Peg”).

Many aspects of the two parishes reflect a history hinted at by their churches’ venerable appearance. Laemmel, for instance, likens her services at two churches and her commute from her home in Croton-on-Hudson to the work of the “circuit riders,” the Methodist ministers who journeyed on horseback from parish to parish in the early days of the American church, when there was a shortage of ministers.

Methodism began as a movement within the Church of England when brothers John and Charles Wesley held “Holy Club” meetings at the University of Oxford in the 1730s, trying to discover “how to methodically live as a disciple of Christ in the world,” according to Laemmel. Because of this, they were derided by others as “Methodists,” and the name stuck.

“What they decided was that the basic premise of Christianity was to do mission,” explained Laemmel. In England’s transformation from an agricultural to industrial society, people began moving to the city, where slums grew. “There were no churches connected with those slums. They would actually go into bars and preach.” The Methodists, in their mission “to do no harm and do all the good that you can” — created many hospitals and schools for the poor.

The end of the American Revolution sealed the fate of Methodism as a separate entity from the Anglican Church, which would not return priests to the former colonies. John Wesley therefore sent some Methodist leaders to America, and together with those who had stayed, they created the Methodist Episcopal Church in 1784. 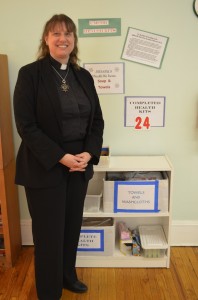 Rev. Margaret Laemmel by the health-kit station in the hall of the United Methodist Church of Cold Spring

The Methodist Church was, for a long time, “the church of America,” especially as it grew during the 19th century. The Methodist churches in South Highland (whose current building was built in 1887 on the site of the smaller 1829 sanctuary) and Cold Spring (built in 1868 to replace the smaller 1832 building at Church and Main) grew while the West Point Foundry was operating.

“Methodism grew up with America,” Laemmel said. “Our charter is very similar to the American Constitution.” The church also held up the idea of all people being created equal. “That is reflected in the idea of the church, even though we haven’t been very good at it at times, like America has not been very good at it at times,” she added, alluding to divisions within the church as well as in the nation.

In 1968 the church joined with the Evangelical United Brethren to form the UMC, whose website (umc.org) states that at the time, the church “had approximately 11 million members, making it one of the largest Protestant churches in the world.”

Nowadays, the two churches, like many in the nation, seem to have returned to the idea of the circuit rider, with part-time pastors. Laemmel, who teaches English as a second language in Tarrytown during the week, explained: “People don’t come to church just to come to church anymore. That’s a waste of your time.”

She explained that people often shop for churches. The old adage that “you were born a Methodist, bred a Methodist, and when you die, you’re dead a Methodist” no longer exists. Instead, she said, people go church-shopping — “It’s the pastor, the people, and the programs: the three Ps.”

The programs of the two churches, which collaborate on projects and for special services, often reflect the focus on mission. In addition to hosting Girl Scouts and AA meetings, they participate in projects such as their ongoing collection of items for health kits that can be distributed by the UMC to victims of disasters. 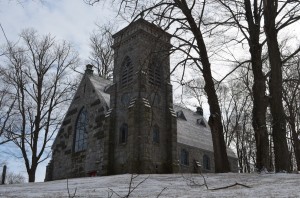 Last year, the South Highland church ran “Teddy Bears in the Pews,” in which new stuffed animals were donated and hugged by parishioners before being given to the Garrison Fire Company for distribution to children during emergencies. The Cold Spring church worked with Exodus Transitional Community Inc. to collect and donate clothing, suitable for job interviews, to men and women re-entering society after incarceration.

Current South Highland Sunday School teacher Pat Harrington added that the churches conduct an annual coat drive. They also collected donations for Hurricane Sandy victims and contributed to “Nothing but Nets,” a campaign to end malaria. The Sunday School children often give to Heifer International, which provides livestock and training to communities to end hunger and poverty.

Harrington added a contribution made by her own daughter, Christine Harrington, who went to Mozambique on two short-term mission trips funded by the church — a “wonderful opportunity for her in her 20s that really opened her eyes to how very fortunate we all are here.” 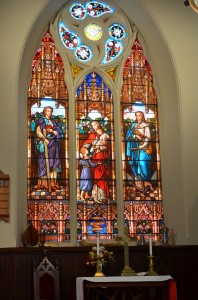 The main window at the United Methodist Church of South Highland depicts Faith, Hope and Charity.

Encouraged by her mother-in-law about 20 years ago to attend the South Highland church, Harrington said she had felt “so very welcomed” that she has been attending services there ever since. “This is the kind of a place to go to find some quiet time,” Harrington said. Many parishioners find the old church a refuge from present-day distractions, “a break from the craziness of the world today, to focus on whatever your faith is, to focus on something bigger than ourselves and how you can help others.”

Laemmel said, “We are all ministers in the Methodist Church,” which is sometimes called “the church of all ministers.” She continued: “All of us have ministry. You are out there to heal the world with your job.”

True to the Wesleyan spirit, the Methodist churches here continue to focus on helping others. They even continue the methodical study of how to be a disciple of Christ in a joint Bible study group, which this spring comes with a workbook, A Disciple’s Path. The group meets in the Cold Spring church from 1 to 4 p.m. on the second Sunday of the month.

Sunday services begin at 9:30 a.m. in South Highland (19 Snake Hill Road in Garrison) and at 11 a.m. in Cold Spring (216 Main St.), both followed by a coffee hour and refreshments. Laemmel’s sermons are posted weekly on pastorpeg.wordpress.com, and the parishes may be reached at 845-265-3365 or [email protected]

The churches are currently seeking a pianist/organist to play at either or both Sunday services. Both churches house working 19th-century organs as well as pianos, so no organ experience is necessary.