Back in the days when ladies wore gloves to all occasions, when tea was poured at meetings and one wouldn’t dream of toting a baby along to a social engagement, the women of the Philipstown Garden Club (PGC) had a code of behavior along those very lines, but gentility and civility didn’t preclude the raison d’etre of their organization: taking the gloves off and getting their hands dirty, literally, from the soil.

Right from the start, though — the PGC will celebrate its 100th anniversary next year — these graces masked an activism in service of the natural world. The original constitution, from 1914, stated in part: “The object of this club is to further interest in gardens, their design and management … to aid in the protection of trees, wildflowers and birds on a community level.” 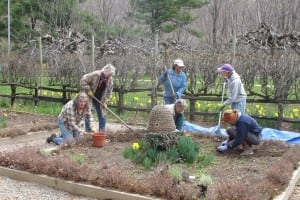 Throughout its history, whether it was the between-the-wars landscaping of Butterfield Memorial Hospital or fighting the installation of billboards on the new highways cutting through once-pristine fields; the 1930s lobbying to get a quarry on 9D closed down; the World War II encouragement of “Victory” gardens, to the much more recent organized protests against Con Edison’s intentions to build a power plant on Storm King mountain, “the ladies of the club” have not only hosted flower shows and learned the art of flower arranging but looked beyond their own backyards, so to speak, in helping to conserve this part of the Hudson Valley.

On May 3, the PCG will be hosting a cocktail party and silent auction (with goodies like boat rides around Manhattan and a week at Whiteface Mountain at Lake Placid) at Boscobel, where they designed and now maintain the herb garden. This will be followed by their always well-attended plant sale on May 18 (rain date May 19) at North Highlands Fire House. The plant sale is unique because the plants are from the members’ gardens and thus have been proven to do well in this area’s soils and climate. The expert gardeners are also on hand to give advice to novices.

Five longstanding members — Libby Healy, who took the longevity honors, having joined in “1949 or ’50;” Grazia Girod, a relative newbie, having joined in 1969; Felicia Saunders, whose mother designed Boscobel’s herb garden; and Beverly Leardi, current president and a member for a mere 20 years; and Margaret O’Sullivan, also a two-decade veteran — recently gathered to talk about past and present-day activities. Healy, whose mother was an early member, recalled the meetings of her youth as “much more formal — by invitation — the potential member was not to know she was being considered.” O’Sullivan said the practice was still in place when she joined. “I had no idea if I would be approved.” 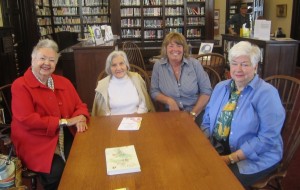 Healy continued: “It was much smaller then, and nearly all the meetings were at people’s homes. Tea was served; they dressed. Gradually this changed as more people did their own housekeeping. They did serious things, but in an old-fashioned way. It’s interesting how change occurs; we used to have an annual picnic, a big production. Everyone had to get a table together: one hostess and eight people — it didn’t work.”

O’Sullivan piped in, “If you weren’t invited to a table, there was no place to sit!” Healy’s eventual solution was a potluck, “but that idea needed to mature.”

Leardi described today’s socializing as quite different. “Now we want to invite new members in, and allow them to meet other members in a relaxed manner.” Girod added, “We want the public to know that it’s a serene group that takes you out of the hustle and bustle of everyday life.”

Serene though it may be, it is a very active group as well. Today their activities range from presenting horticultural, conservation and environmental programs and workshops for the community and organizing road cleanups along Route 9D to maintaining Boscobel’s herb garden and flower boxes in various public spaces. Older members work frequently with newer, younger members, simply teaching them the basics of gardening.

Recently some of the “provisional” (newest) PGC members re-did the greenhouse at Haldane. Using a gift of 400 daffodils from the Garden Conservancy, the PGC planted them at the school and naturalized them. Another group helps out at the Garrison School Forest. Their internship program funds the placement of five local high school students each summer with area nonprofits, including Stonecrop Gardens, Manitoga, Glynwood, Constitution Marsh and the Garrison Institute. The PGC also maintains a website and sends out a bi-monthly newsletter.

The club operates with a board, a president and committees. They field a lot of requests for help, sometimes from beyond the local area. They are affiliated with the Garden Club of America (GCA), which O’Sullivan calls “the driving force, who are active in lobbying the government on things like anti-fracking and cracking down on billboards.” 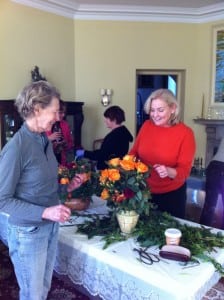 Saunders said the club “always sends delegates to the annual meeting of the GCA. It’s inspiring to meet members who are accomplished both horticulturally and politically.” Girod concurred, “It charges all of us up.”

The GCA is divided nationally into zones, and within New York state there are 22 individual clubs in operation. Sometimes the GCA requests that clubs take on a particular project; for example, they were asked to do something with trees, and this year on Arbor Day a number of American Chestnut trees will be planted at The Nest, Stonecrop and Bannerman’s Island. Next year the PCG will hold a flower show at the Putnam History Museum at the end of May and will celebrate their centennial with an “As Time Goes By” cocktail party.

Anyone interested is welcome to come to the open meetings. Members do still have to be sponsored; once accepted they become “provisional” members for a year because, according to Leardi, “this is really a working club. Some people join thinking it’s just fun and find it’s not for them.”

With the changing times, the club is figuring out how to accommodate the diversity within the community, down to choosing the best times for meetings, which have drifted to later in the day to reflect a working population still interested in the pursuit of gardening. Still, if members stay dedicated to the club for decades, rewards do come in time.

“Finally, you get to be a sustaining member,” said Healy. “You can go to the parties but not do the work.” That’s handy, added Girod, as “the ground gets farther and farther away.”

For more information on the PGC, visit pgcinc.org.