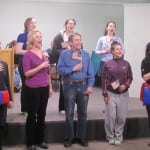 Ladies and gentleman: the cast rehearses in their performance space, the Program Room at Desmond-Fish Library.

It all began simply, with a story — a story about shopping and how it can be such a totally different experience for a man and for a woman. This story, a personal experience, belonged to Del Fidanque, who decided, “I’m going to write a short story about it because it’s in my head.” That kernel has officially popped, joining with other stories to form an 11-person revue, or, as Fidanque calls it, a dance play with music, drawn together under the collective title of Comedy in the Afternoon. The show, performed under an Actors Equity Association (AEA) special-appearance contract, will be performed in the afternoon only from May 2 through 25 at 1:45 p.m. at Garrison’s Desmond-Fish Library.

Comedy in the Afternoon aims to attract a population too tired to attend evening performances or, alternately, the many in the freelance world whose schedules free up their time outside of the 9-to-5 norm — “There’s a real need to serve the senior and freelance communities,” noted Fidanque. The production, which consists of a number of disparate sketches all circling around a common theme, features an abundance of dance and music — the music in the form of live performances from a cellist and flutist. The thread linking all of these theatrical fabrics together is the idea of celebrating diversity. “Each of the scenes says, in one way or another, that we are all part of the same human family. Together as individuals we can celebrate this,” said Fidanque, a longtime Garrison resident.

It has taken two years to transform that initial idea into a full-fledged production. Once a great deal of it was set into place, Fidanque held Equity auditions in New York City and assembled a cast of 10 women — he is the lone representative of his gender — most of whom are coming up from the city or close to it for rehearsals. They have played a role in shaping the material, with Fidanque re-jiggering some of the content based on skills and talents he discovered from the initial auditions onwards. After the audition notices were posted on the AEA website and sent out to the theatrical trade papers, Fidanque was flooded with responses. Reading the many resumes, he felt he should take a chance on showcasing unusual things like foreign language proficiencies — hence there are six languages showcased in the show. 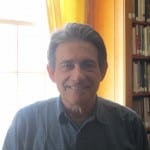 Some of the material is in the vein of personal reminiscence, while other portions are more topical and political in nature. Fidanque hopes that “no one is portrayed negatively, but sometimes the ideas they espouse hurt others. Mel Brooks said, ‘If you disagree with something and want to make a point, use humor.’ That’s the spirit with which these scenes were created; expect laughter.”

The reminiscences draw upon Fidanque’s early childhood, growing up in the 1950s on Long Island and later in a Connecticut boarding school. “I was never an academic,” he related. “I had the ability to mimic, so I spent a lot of time in the hallway. Boarding school was a horrific experience, but I’m making it funny. Then no college wanted me, but it turned out that one school in the Midwest was desperate for an East Coaster. I didn’t do well there until I was given the lead in a play. That was the beginning of my theater work.”

Fidanque eventually received his master’s in theater from Adelphi University, where he studied with Jacques Burdick, who was the director of the Pillory Theater group, which used the techniques of Jerzy Grotowski. He then migrated to the Ensemble Studio Theater for classes and workshops and wound up, like many actors before him, doing “a lot of industrial films, which I couldn’t make a living from.” A switch to advertising sales followed, his theatrical career dormant until this endeavor. “Theater came back in my retirement,” Fidanque said. “It’s like riding a bike — it all stayed with me. The most important thing Burdick told me was to honestly express yourself and not be afraid of where it goes.”

At a rehearsal about two weeks before opening, the actors were working through a scene featuring Michele Bachmann, speaking to a crowd, interrupted by a young Latina woman and by Fidanque, playing multiple roles, including a working guy, a redneck and Gov. Bentley of Alabama. Multiple roles are the norm in this production, with almost all of the actresses performing at least four different characters.

Three of the actresses, Elyse Knight, Gloria Makino and Heather Wahl, talked about the production, beginning with the unusual audition requirements. “I went out for the one in which I had to speak French and play Michele Bachmann!” said Knight. Makino’s calling card was “I speak five languages and play castanets.”

Knight described the rehearsal process as one in which “each person is shaping the show. Also, it’s topical, which means things keep shifting.”

Wahl added, “It’s a very collaborative group. Del did a nice job with casting, and the two dancers in the show complement each other very well. Another nice piece is the musicians; there’s a pretty selection of music, and they are talented and flexible in collaborating with us, lengthening and shortening things — just making it work.” 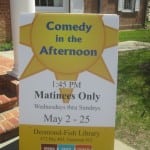 Asked to describe the show, Knight said: “It’s so based on one young boy’s journey through America, navigating all the snafus.” Wahl interjected, “Interlaced with some political commentary.” Makino offered, “It’s a quirky comedy with a hint of political satire, and it has a very American theme: diversity, the melting pot, how the American landscape is changing. Plus it’s great to have so many female roles, as theater is still so male-dominated.”

Fidanque, who has long been involved with Friends of the Desmond-Fish Library, praised the great cooperation he has received from the library. He hopes that the show will have a life beyond its first run. “It would be great to bring it to the next level. It’s being done now because it’s a worthy project, and right now what it’s doing is bringing more theater to Philipstown and the many residents here who love theater and those who are theater professionals.”

For more information, visit comedyintheafternoon.com. Tickets cost $28 for general admission and $22 for seniors and students, and can be purchased at the door or through brownpapertickets.com/event/279418.

All photos by A. Rooney