Main Street Cold Spring is ready for what merchants and organizers hope will be a very busy May 4 and 5 weekend, and if the international cycling race scheduled for Sunday is any indication, it will be. Pedal Into Spring, a first-time event organized by the Cold Spring Area Chamber of Commerce in cooperation with Putnam County Tourism, will take place both Saturday and Sunday. The Ridge Hill Putnam Cycling Classic will be held on Sunday.

Pedal Into Spring, a flower festival, will offer two full days of Main Street activities, ranging from a petting zoo, face painting and storytelling to guided tours of village gardens and educational displays. Live music will be performed both days from noon to 5 p.m. on a stage located between Hudson Valley Outfitters and the Foundry Café. Tents and tables will line the street as merchants and organizations take their wares out to the sidewalk. 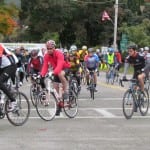 The cycling event, which will start and finish in Cold Spring, is the only U.S. stop on the UCI World Cycling Tour, a series of timed, Gran Fondo-style rides held on five continents. It will also serve as the American qualifier for the Masters World Cycling Championships in Trento, Italy in September.

Three hundred cyclists have registered to date, including two world champions and a strong international field, according to a press release issued by the Putnam Cycling Classic. Three-time World Cyclocross Champion Erwin Vervecken of Belgium and double world champion Ann Marie Miller of New York City head the list of international riders. Strong contingents from Costa Rica and Canada will also take part. “I rode in the first classic (in Cold Spring) last October,” Miller said. “It’s a hard and beautiful race course … a worthy event for an international effort.”

The start of Sunday’s race will be highly charged as hundreds of cyclists leave from Dockside Park in a mass start at 10:30 a.m., then head out into Putnam County on circuits of 79 and 39 miles. The finish line will be at Mayor’s Park on Fair Street. 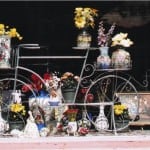 Cold Spring’s Bijou Galleries is one of a number of Main Street businesses competing to create the display window that best depicts Pedal Into Spring and its dual themes of flowers and bicycles. Photo courtesy of Bijou Galleries

Pedal Into Spring will also have its competitive aspects. Shopkeepers will vie for the best storefront display — the window that best captures the weekend’s dual themes of flowers and bicycles.

Bike owners of all ages can also take part in a friendly competition for the best decorated bicycle, all to be featured in a riverfront parade on race day.

Alison Anthoine, chair of the Pedal Into Spring publicity committee, said the group focused its energies on public relations, event listings and promotional materials rather than advertising. Several thousand copies of Eventful Magazine, whose centerfold is the latest edition of The Paper’s popular Philipstown Visitors’ Map, were distributed regionally. “I received several calls in response to our press release, (including) one from a New York City cycle club that will have 100 cyclists riding up on Saturday,” Anthoine said. Metro-North will offer the Putnam Classic Express on Sunday, leaving Grand Central Station at 7:50 am and arriving in Cold Spring just after 9 a.m.